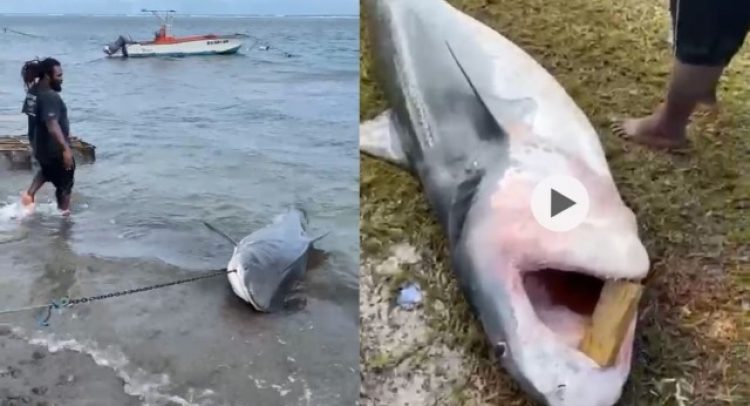 Basseterre, Monday, 18th January, 2021, (MyVue News.com)- A fisherman in the old French town of Dieppe Bay St. Kitts, on Monday 18th January, 2021, became a local hero to his community and his other fisher folks, when he caught a shark that had been causing some problems in the area in recent days.

From early Monday morning, villagers in the area began sharing social media messages, including videos, showing the shark, which is estimated to be about 7 feet in length,shortly after it was caught by Wayne Williams, who said he took action after some of the fishermen complained that their catches were being eaten by the shark.

Williams said that on Sunday, the fishermen explained to him that the shark was becoming much of a challenge and recognized that something needed to be done, if they were to save their catches.

Williams therefore decided to set some shark lines and not longer after, he was able to capture the predator.

From Williams’ remarks to local media, it would appear as though other sharks might be lurking in the area.

It was only last Saturday, 9th January, 2021, when another shark was reported in the waters of St. Kitts, this time, just off Booby Island, when it attacked a young university student, resulting in the loss of one leg.

Other shark sightings have also been recently reported in St. Maarten and Dominica and some residents are starting to become very concerned about the frequency of shark incidents.

Norway says advice on use of Pfizer vaccine is unchanged