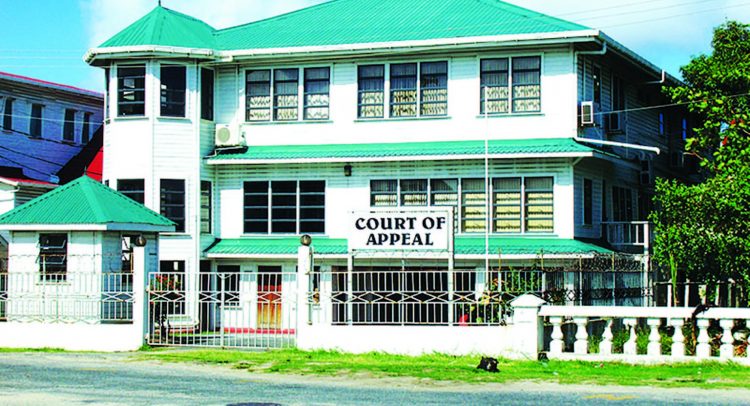 In a new turn of events in the protracted electoral process, a supporter of the caretaker A Partnership for National Unity/Alliance For Change (APNU/AFC) Coalition has moved to the Court of Appeal seeking a series of orders to block the Guyana Elections Commission (GECOM) from moving ahead with the declaration of the final results from the March 2 elections.

The Court is being asked to make a declaration that GECOM has failed to “determine a final credible count and/or the credibility of the results of the General and Regional Elections” in accordance with Order No. 60 of 2020 and the amended Order dated the 29th day of May, 2020.

David also wants the court to issue an order for an interpretation of the words “more votes are cast” in Article 177 (2) (b) of the Constitution.
Already, Peoples Progressive Party/Civic (PPP/C) Presidential Candidate Dr Irfaan Ali has been deemed, according to Article 177(2) (b), the President-elect of Guyana, given that the party has secured the most votes at the March 2 polls.

The Coalition supporter also wants an Order restraining the CEO from submitting to GECOM his elections report which contains votes that are not valid and credible within the meaning of Order No. 60 of 2020, and under Section 96 of the Representation of the People Act.

The Notice of Motion was served on the CEO before 13:00h on Thursday – the deadline that he was given by the GECOM Chair to submit his final elections report. GECOM Spokeswoman Yolanda Ward told reporters, “The Notice restrains the CEO from complying with the directions of the Chairperson, and as a consequence, a report was not submitted.”

However, several legal luminaries have argued that there was no order or injunction obtained from the court to stop the Elections Commission from proceeding with receiving the CEO’s report, thus paving the way for the declaration, which would see the PPP/C being named the winner of the 2020 elections by over 15,416 votes.

“This is a nuisance-value litigation. It has absolutely no prospects of success… It is filed by one lawyer, who hardly has a practice in Guyana. It must be ignored by the Guyana Elections Commission (GECOM). The nation’s important business cannot be stalled on the basis of such legal frivolities. It confirms APNU/AFC’s pandemonium!” Nandlall asserted.

He surmised that this litigation is simply designed to stall the declaration process, and must be rejected by GECOM. “The Chairperson, an experienced former Court of Appeal Judge, would clearly see it for what it is: specious, wholly without merit, and an abuse of the process of the Court,” he contended.

Moreover, Nandlall told the Guyana Times that by moving to the Appeal Court, which has special jurisdiction, the applicant is trying to us to judiciary to commit a coup, since they are attempting to shortcut the legal provisions to deal with such matters, that is, via an elections petition which has to be filed in the High Court after the swearing-in of the new Government.

“They don’t want to do that. They want to stay in the Government, so they are trying to circumvent that procedural and legal pathway. So now they wrongly invoke this special process in the Court of Appeal and are seeking reliefs that can only be claimed in an elections petition. All these issues concatenate to question the validity of the elections process, but this can only be done by way of an elections petition,” the former AG pointed out.

Nevertheless, he noted that the PPP/C has been joined in the proceedings, and was further informed by the court to attend today’s hearing at 13:30h, and must have their submissions prepared.

Why cricket boards are wrong to crack down on YouTubers