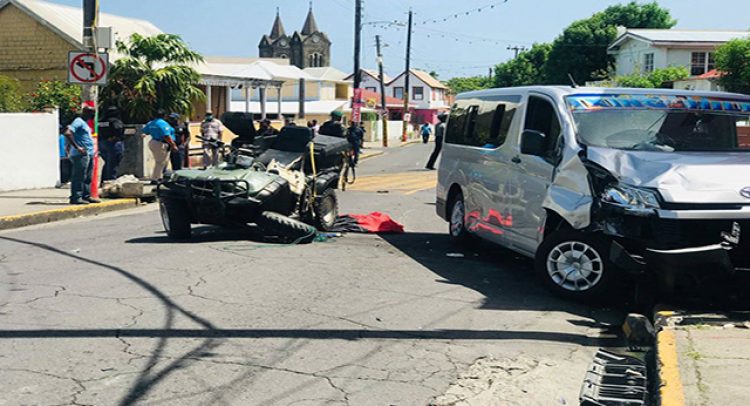 Basseterre, 30th May, 2020, (MyVue News.com) – After Friday’s major traffic accident in Basseterre, police are again urging members of the public and drivers, in particular, to exercise extreme caution, when using the roads.

It was only the day before, on Thursday, 28th May, that a similar appeal was made, then less than 24 hours after, another collision occurred, this time more serious.

On Friday afternoon, sirens could be heard blaring their way to the scene of an accident that left two severely injured.

Involved in the collision were two vehicles. One was a silver passenger bus, H 3874, and the other, a green ATV, carrying the license plates P 3431.

The severity of the clash ended with the bus hitting a light pole and rupturing a close by water system, sending water gushing to the air.

The ATV received serious damage but the two men who occupied that vehicle sustained injuries that required hospitalization.

One of the two is also said to have lost both legs. However, word on the injuries of the driver of the bus,”king ah de hill”, is not yet clear.

The police spent hours on the scene trying to put the puzzle together, to determine exactly what transpired. But if their surveillance cameras are operational in the area, where many are located, then, finding the truth about how the accident occurred, should not be too difficult.

Their investigations are ongoing.

However, it s not the only road incident they have had to be dealing with, in recent days, since the curfew was partly lifted.

Police issued a statement, the day before, telling motorists, “…that you are to give yourself sufficient time to get home without having to drive above the speed limit or driving risky – taking risks.”

They continued, “Some persons do not even stop at the roundabouts, they just go straight through disregarding persons who may be already in the roundabout or who are approaching from their right,” said Superintendent Henry, who heads the district where the accident occurred, Wellington Road, Baker’s Corner.

Henry said that once again, “we appeal to all road users to observe all traffic rules and to give yourself sufficient time so that you do not have to exceed the speed limit or break traffic rules to beat the curfew. The life you save may be your own.”

The Superintendent said that the police are currently investigating several traffic accidents around the island that occurred close to the start of the nightly curfew.

“We are beginning to see a pattern of significant damages resulting from these accidents around this time,” he explained.

Another, of the recent accidents occurred last Monday night on the F.T. Williams Highway which resulted in a pole being completely uprooted from its base leaving the area without electricity for some time.

“We suspect that these are persons who are hurrying to get home before the curfew”, said Henry.