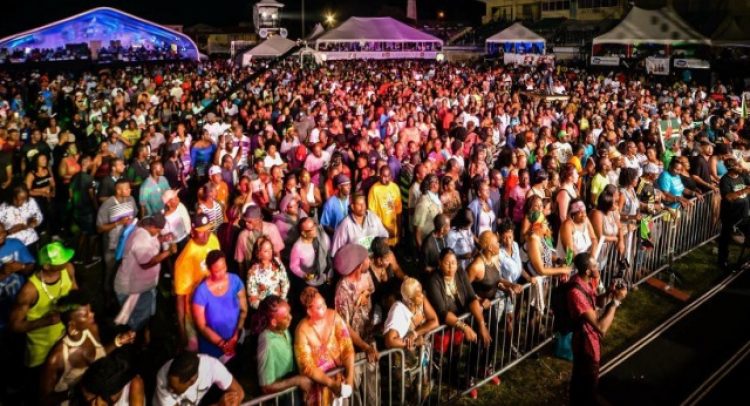 The last festival, the 23rd edition, was staged in June 2019, with the likes of Buju Banton, Smokey Robinson, Davido, and Ella Mai. This was a year that many classified as the greatest ever. It certainly was, in terms of crowd attendance, atmosphere, and performance levels.

The new venue too, (the Kim Collins Athletic Stadium), added value and ambiance, overlooking the picturesque city of Basseterre.

But, were it not for COVID-19, both the 24th and 25th anniversaries would have equally gotten their chapters in the history books of exceptional festivals.

It was destined to be a Silver Anniversary like no other, said festival Chairman, Damion Hobson, under whose leadership the event, in recent years, has recorded significant growth, not only in popularity but also in attendance and quality production.

After 2019, Hobson and his committee were under much pressure. How would they surpass 2019, was the question on everyone’s mind in 2020.

The excitement for edition 24 was already building and the hype was contagious, spreading across the Caribbean.

The anxiety last year over the new and rising sensation, Koffee, was high and so too was the excitement over Beres Hammond and Jimmy Cliff.

Looking back, one can say that at least 2020 got a Roster Release.

The committee has not even been able to plan a new roster, though much hope was being kept alive. Just before the cluster of COVID-19 cases on 19th May, 2021, there was still some hope. But 19th May turned out to be a game-changer.

The thought of a downsized festival, (not in June), all vanished.

Who knows though, maybe not entirely.

Chairman Hobson explained that great sums were spent last year to contract artistes for 2020, and those deposits could be lost entirely if no concerts are staged up to the end of 2021.

This is money already spent, and if the COVID-19 conditions are improved and if enough citizens and residents are protected from the virus, through vaccination, it would be justifiable if the committee organizes, even a one-night concert in November or December.

Though the festival is a fantastic entertainment and tourism product, it must also be viewed through the lenses of benefits that accrue to small and medium-sized local businesses.

It is an important economic booster for local vendors and it is also becoming more self-sufficient.

Under his stewardship, Hobson has demonstrated that the festival could be more viable, financially, and he and his management team, in three years, have been successful in boosting ticket and overall revenue, attracting new concert-goers and sponsors.

While the 2019 festival was the best and biggest since 1996, Chairman Hobson had been working with his team, two years in advance, to create a spectacle for 2021 that would have attracted top-class entertainers.

The double whammy of setbacks in 2020  and 2021 has been devastating. Festival lovers are wondering “what could have been.”

Had times been normal, this would have been ‘festival week’.

At this stage, most of the arrangements would have been in place, waiting for the kick-off on Wednesday with the Escape Fete, followed by the concert nights on Thursday, Friday, and Saturday, and ending with the White Sands party on Sunday.

Instead, the killer virus COVID-19 is spreading.

Let us hope that the expected 70% Herd Immunity would be achieved soon. Everyone can contribute by stepping forward to be vaccinated, and by following all non-pharmaceutical protocols.

This is the third time overall that the festival had to be deferred, with the first in 2000 when CARIFESTA was staged in St. Kitts in July/August, and the decision was taken to postpone the Music Festival of that year, and instead incorporate a “Super Concerts” concept into CARIFESTA.