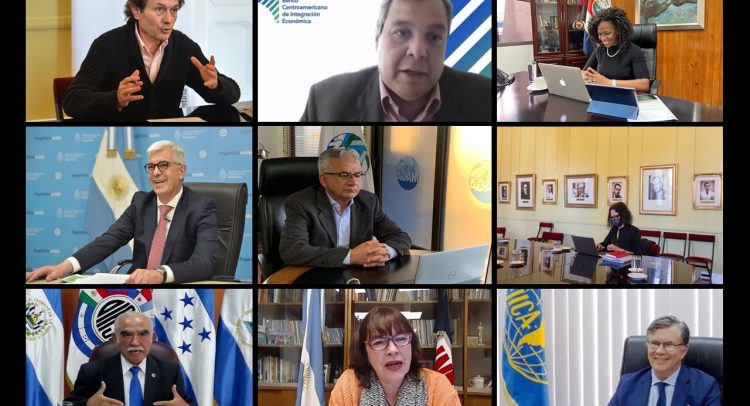 The announcement was made at the event, “Argentina and capacity development in Central America”, organized jointly by the Central American Bank for Economic Integration (CABEI) and the government of the South American country, through its Secretariat of Strategic Affairs in the Presidency of the Nation.

“In a world that is building walls to isolate us from each other, our duty is to do the very opposite: to build bridges of solidarity, friendship and cooperation. We need to foster rural retention, as we are facing dramatic levels of migration. The challenge is to generate opportunities through production projects”, said Gustavo Béliz, the Secretary of Strategic Affairs in Argentina’s Presidency of the Nation.

“There are areas that we must further develop: the agriculture 4.0 cooperation agenda, good soil use practices, biotechnology and natural resource conservation. We cannot delay any longer, because there is a great need to address pressing social problems”, he said, while announcing that the country would award 100 doctoral scholarships to enable citizens from Central America to travel to Argentina to receive training in agrifood issues.

Argentina is one of the extra-regional member countries of CABEI – a multilateral financial development institution. This year the bank approved a funding program to fuel the recovery of production activity in rural areas that were hard hit by the COVID-19 pandemic.

On the other hand, Argentina is a major agrifood production player that has already sent technical missions to Central America and transferred knowledge in good agricultural practices to contribute to food security in that region.

In addition to Béliz, the meeting was attended by CABIE President, Dante Mossi; Vice-President of Costa Rica, Epsy Campbell;  Argentina’s Minister of Agriculture, Livestock and Fisheries, Julián Domínguez; Guatemala’s Minister of Agriculture, Livestock and Food, José Angel López; Argentina’s Secretary of International Economic Relations, Cecilia Todesca; the Executive Director of the International Regional Organization for Plant and Animal Health (OIRSA), Efraín Medina Guerra; the President of Argentina’s National Agricultural Technology Institute (INTA), Susana Mirassou; and the Director General of the Inter-American Institute for Cooperation on Agriculture (IICA), Manuel Otero. Also present were representatives of the diplomatic corps and of regional and subregional organizations, as well as authorities from producer associations in the agriculture sector and the agrifood value chain in Argentina and Central America.

The CABEI President announced that the multilateral financial entity was planning to open an office in Buenos Aires.

Dante Mossi commented that, “We can learn a great deal from Argentina, a country that has an extensive track record in areas such as education and vaccination campaigns in rural areas. A great deal of knowledge has been generated. We are keenly interested in expanding this cooperation”.

Mossi also said that collaboration with Argentina would offer Central American countries “a huge opportunity to improve the way we feed our people, through technology and innovation. Argentina’s rural areas and farmers are marvelous, having innovated to produce more and better food”.

José Angel López, the Guatemalan Minister of Agriculture, stressed the South American country’s leading role in agriculture. “In the last 25 years, Argentina has been the epicenter of a veritable agricultural revolution in genetics, biotechnology, agricultural equipment, and in precision and digital agriculture. The country has set the gold standard globally for grain production, erosion reduction and soil conservation”.

The minister said that, “We want to replicate this model in Central America, in order to have more food without degrading our natural resources, as citizens of a region that is vulnerable to the effects of climate change. Argentina is a very important strategic ally”.

His colleague, Julián Domínguez, highlighted Argentina’s achievements in biotechnology and its contribution to tackling the effects of climate change, and in general, to reducing the environmental impact of agricultural production.

Domínguez also spoke of the cooperation with Central America, stating that, “when we promote cooperation agreements with other regions, what we learn is much more than what we can even impart”.

INTA’s President, Susana Mirassou, remarked that, “Argentina stands ready to share with the countries of Central America its knowledge and experience in matters such as precision agriculture, smart livestock rearing and different ways to access water, with a particular focus on climate change mitigation and adaptation and an emphasis on the gender and youth agenda.

Currently, trade between Argentina and Central America amounts to 1 billion dollars annually, according to Cecilia Todesca, from the former’s Secretary of International Economic Relations, who said that that figure is low and should be increased.

“Great opportunities exist”, she said. “If we develop sustainable projects on the economic, social and environmental front, we can improve the well-being of our people. During the meeting, Pablo Sívori, Under-Secretary of Trade Promotion and Investment at Argentina’s Ministry of Foreign Affairs applauded public-private sector collaboration, citing outstanding examples of Argentinian companies and pointing to the contribution of IICA’s experience to identify challenges and opportunities.

“Central America is very important to IICA. We have almost 90 professionals working in that region and a project portfolio valuing approximately 75 million dollars – whether from our own resources or external funding”, said the Director General of the Institute.

Manuel Otero argued that climate vulnerability and food insecurity in Central America are two important problems that feed off each other. He pointed out that the region has almost 60 million inhabitants, 22 million of which are rural inhabitants, with 2.4 million of them being family farmers.

“We are concerned about the situation in the Central American Dry Corridor. In that region—in El Salvador, Honduras and Nicaragua—there are more than 10 million people experiencing severe vulnerability problems. Agriculture in Central America is a sleeping giant. Therefore, South-South cooperation and the ties with Argentina, a country with a vast storehouse of technology and knowledge, is critical, as it could help to transform agriculture’s reality and Central America’s reality”.

Finally, Alfredo Paseyro, General Manager of the Argentinian Seed Production Association (ASA), referred to the potential of Argentina’s contribution to the countries of Central America in seed improvement and underscored the role of IICA and its Director General in coordinating joint efforts.