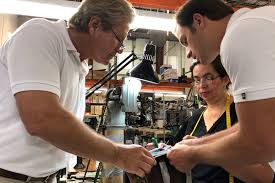 Michael Korchmar was hiring. His family-owned travel-goods company was planning to make a new product, an insulated food bag, and he had put out help-wanted notices for up to 30 workers to run the sewing machines in his small factory on Florida’s Gulf Coast.

Those plans are now on hold. The reason: a bill quietly moving through Congress that would temporarily reduce or eliminate protective tariffs on 1,662 products, including the type of bag Korchmar had planned to produce. The bill would cut costs for rivals who make their bags in low-cost countries like China, he said, squeezing him out of the market before he had even entered it.

“Given that these products will be able to come into the country duty free, it’s not likely that there’s any ability for us to compete,” Korchmar said in a recent interview at his factory, which currently employs about 20 people.

Even as President Trump threatens to slap protective tariffs on steel and aluminum, lawmakers are moving forward with legislation to lower trade barriers on hundreds of other products, from chemicals to toasters, in a bid to lower costs for U.S. companies and consumers.

Supporters of the so-called miscellaneous tariff bill, which unanimously passed the House of Representatives in January, say it would boost the economy by getting rid of tariffs designed to protect U.S. industries that no longer exist. The National Association of Manufacturers says U.S. companies pay hundreds of millions of dollars each year on unnecessary import fees.

Critics say that miscellaneous tariff bills, which began decades ago as modest efforts to help U.S. manufacturers, have in recent years become sprawling packages of tariff reductions that undercut domestic producers without the means to defend their interests in Washington.

Ohio Senator Sherrod Brown, a Democrat who worked to get several products removed from the current bill, said Congress should do a better job to ensure tariff reductions do not impede U.S. producers. “Miscellaneous Tariff Bills should help, not hurt American manufacturers,” Brown said in a statement to Reuters.

Miscellaneous tariff bills were originally conceived in the 1980s as a way of lowering costs for U.S. manufacturers that could not get chemicals and other component products from domestic sources. The original point of the efforts“was to encourage domestic manufacturing,” recalls Jennifer Hillman, who worked on the legislation as a Senate staffer in the 1980s and 1990s.

All but two of the 163 items in a 1999 version of the bill, for example, were used in the manufacturing process, according to a House Ways and Means Committee report.

Since then, Congress has broadened successive tariff bills to include many finished products that can go straight to store shelves.

Only 55 percent of the items in the current bill are“intermediate goods” used in manufacturing, according to applications filed with the International Trade Commission. Many of the rest are finished consumer products.

None of the companies responded to requests for comment about the inclusion of their products.