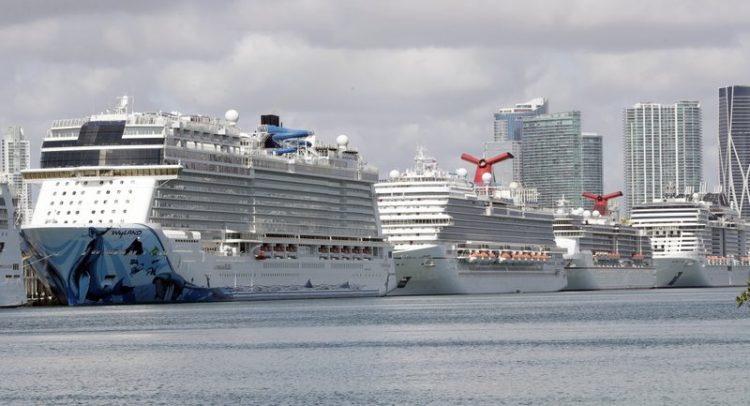 As cruise industry prepares to sail, choppy waters are ahead

Some cruise lines are hoping to set sail later this summer but with images of coronavirus-ravaged ships still fresh in many minds, the industry could face years of choppy water ahead.

The global cruise industry expected to carry 32 million passengers and take in $71 billion in revenue this year. That will fall by at least 50% this year, says Euromonitor International, a consulting firm. It took the industry three years to recover from the 2009 recession; this time, it will take longer, Euromonitor analyst Alex Jarman said.

“Unlike the previous downturn, the pandemic has put the safety of cruises into question,” Jarman said.

Cruise lines stopped sailing in mid-March after several high-profile outbreaks at sea. More than 600 people fell ill aboard Carnival Corp.’s Diamond Princess while it was quarantined off the coast of Japan, for example. Fourteen passengers died.

Christina Kerby was trapped aboard a Holland America cruise ship in February after several ports in Asia refused to allow it to dock.

“I will take a cruise again someday,” said Kerby, of Alameda, California. “Just not anytime soon.”

Norwegian warned of a possible bankruptcy in early May, but then raised $2.2 billion through a sale of stock and debt. It now says it can withstand a shutdown for as long as 18 months. Smaller operators could have more trouble, experts say. Virgin Voyages, a new cruise line owned by Richard Branson’s Virgin Group, has twice postponed its first sailing. Virgin Australia — an airline in which Branson holds a stake — filed for bankruptcy protection in April.

The U.S. Centers for Disease Control has prohibited cruises in U.S. waters through July 24. Operators in Europe and Asia could sail sooner; some German river cruises resumed last week. But most big cruise lines are using this time to refine their plans, upgrade their ships and figure out how to resume safely.

Norwegian says it’s installing medical-grade air filters on its ships and adding medical staff, for example. Carnival is raising the temperature in its washers and dryers to make sure napkins and sheets are fully sanitized.

Cruise companies are talking to U.S. regulators, to foreign ports and to each other, said Brian Salerno, senior vice president for maritime policy at the Cruise Lines International Association, a trade group that represents 95% of ocean cruise companies. That doesn’t always happen in the fiercely competitive business.

“A safety failure for one affects them all,” Salerno said

Most cruise lines haven’t announced their exact plans for reopening, even though they’re accepting bookings. But some smaller companies are giving a glimpse into the future.

Windstar Cruises, which operates six ships — the largest of which carries 342 passengers — hopes to resume cruises in Tahiti in September. Among other things, the company plans to stagger boarding times to keep passengers apart; expand dining times and space diners out; serve passengers instead of offering buffets; and require crew to wear masks and train them to recognize COVID-19 symptoms.

Windstar’s Chief Marketing Officer Betsy O’Rourke said the company expects bookings for 2020 to start picking up soon. Bookings for 2021 are already ahead of where they were this time last year.

“People who know and love cruising will be back,” she said. “They have confidence in us to operate safely.”

But some cruise lovers say they’re just not ready.

Jonathan Adkins is a self-described “cruise junkie” who has been on more than 25 cruises. This year, he and his husband had booked a Caribbean cruise in March and a European cruise in July.

But the pandemic cooled his enthusiasm. Adkins doesn’t want to share tight spaces until there’s a COVID-19 vaccine. And he thinks cruise companies have handled the crisis poorly.

“I’m not comfortable doing business with them for a while,” said Adkins, who heads a traffic safety organization in Washington. He doesn’t think he’ll cruise again until 2022.

Experts say getting new passengers interested in cruising could be even more daunting. Kishana Taylor, a postdoctoral fellow who studies the influenza virus, was already wary of cruise ships because of norovirus outbreaks. Cruising just doesn’t make sense to her, she says, even though she loves the ocean.

Tara Smith, a professor of epidemiology at Kent State University, says she’s not sure how cruises can protect passengers but still be fun. Pools and dance floors can’t be too crowded, for example. Even if ships reduce capacity, droplets can spread between passengers. They could test passengers as they get on board, but they would need to get rapid and accurate results.

“It all seems like a logistical nightmare to me,” she said.

Robert Kwortnik, an associate professor at Cornell University who studies the cruise industry, thinks the industry will make some long-term changes to get back on its feet. Cruise companies will have to make health and safety a major part of their marketing, for example,

More liberal cancellation policies could also stick. Passengers used to lose their deposit if they canceled within a month of a cruise, he said. Now, companies are allowing them to cancel even two days before. That helps ensure people will cancel if they’re sick, he said.

For now, cruise lines are offering big discounts. Brian McLaren, who leads the cruise division for the Liberty Travel agency, said it’s common to see 20% discounts or $200 off per person. McLaren said bookings for 2021 cruises are solid, partly because people with cruises this spring have been rebooking.

Joe Schreck of Jacksonville, Florida is doesn’t need convincing. As a workplace health and safety specialist, he says he’s seen how well social distancing guidelines can work, and he trusts cruise ships to take the right precautions.

“Life is too short to worry about stuff like this,” he said. “You have to enjoy the time you have.”

He’s booked on a cruise to the Bahamas in August.

Photo: In this March 31, 2020, file photo, cruise ships are docked at PortMiami in Miami. The cruise industry hopes to set sail later this summer. But with images of coronavirus-ravaged ships still fresh in many minds, there could be years of choppy water ahead. The global cruise industry expected to carry 32 million passengers and take in $71 billion in revenue this year. That will fall by at least 50% this year, says Euromonitor International, a consulting firm. Euromonitor .(AP Photo/Wilfredo Lee, File)

Keanu Reeves on why he's returning for 'Matrix 4'

Daren Sammy to Sunrisers Hyderabad team-mates: You called me 'kalu', what did you mean?