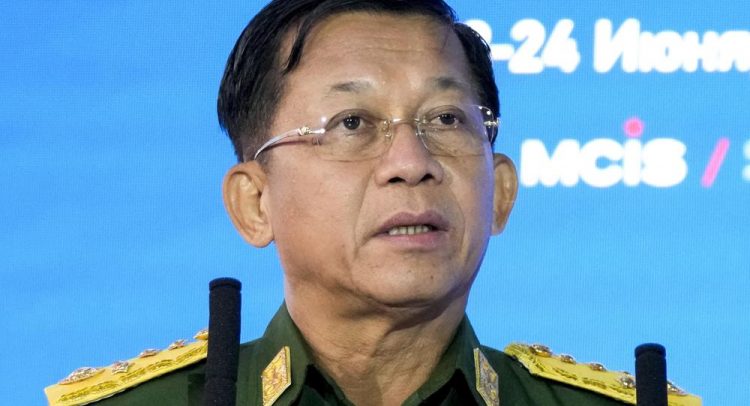 The Association of Southeast Asian Nations had appointed Brunei Second Foreign Minister Erywan Yusof in August as its special envoy to mediate an end to the Myanmar crisis. However, he abruptly canceled his trip to the violence-wracked nation this week after being informed by his hosts that he would not be able to meet Suu Kyi and others as he wanted.

Myanmar officials have said Erywan couldn’t meet with Suu Kyi because of criminal charges against her.

Malaysian Foreign Minister Saifuddin Abdullah said Friday he was informed that Erywan may now aim to visit Myanmar next Monday, ahead of the Oct. 26-28 ASEAN summit meetings.

“This evening, we will be looking at the details of the proposed visit. If there is no real progress, then Malaysia’s stance will remain, that we will not want the general to be attending the summit. No compromise on that,” he said.

The 10-nation ASEAN bloc has been under intense international pressure to take decisive action to force member state Myanmar to free scores of political figures, including former leader Suu Kyi, who was toppled in a Feb. 1 military takeover, and to put the nation back on the road to democracy. Violence in Myanmar has reportedly left more than 1,100 civilians dead since the generals overthrew Suu Kyi’s government.

Allowing Myanmar’s Senior Gen. Min Aung Hlaing to attend the ASEAN summit, which will take place by video, could be perceived as recognition of the military takeover that abruptly halted one of Asia’s most phenomenal democratic transitions in recent history after decades of military rule. Among world leaders due to attend the summit is President Joe Biden, who has condemned the democratic setback and authorized sanctions against Myanmar’s generals, their family members and associates.

ASEAN foreign ministers Friday will consider a number of proposals, including allowing Min Aung Hlaing to attend the meetings without letting him speak, or prohibit him from attending but permitting a lower-level civilian representative to attend in his place, a Southeast Asian diplomat told The Associated Press. The official spoke on condition of anonymity for lack of authority to discuss the issue publicly.

A Myanmar delegation attended last month’s U.N. General Assembly in New York but did not address the body, an arrangement that ASEAN can possibly adopt, the diplomat said.

Saifuddin said ASEAN doesn’t “downgrade a member’s representation to the summit” and will look at other options. With Myanmar’s military-appointed foreign minister indicating his attendance at the two-hour ministerial meeting Friday night, Saifuddin voiced hopes the bloc can find ways to overcome their differences.

Myanmar is widely seen as doing very little to honor its commitments, though it claims to have helped facilitate humanitarian assistance. Suu Kyi has been in detention since the army takeover, and is currently being tried on several charges that her supporters and independent analysts say are contrived and an attempt to legitimize the military’s seizure of power.

ASEAN is hamstrung by its bedrock policy of noninterference in the domestic affairs of member nations and by its consensus decision-making, meaning just one member state can reject any proposal. But some members feel action is justified because major unrest in Myanmar could trigger regional instability.

Philippine Foreign Secretary Teodoro Locsin Jr. has backed the position of his Malaysian counterpart, warning “if we relent in any way, our credibility as a real regional organization disappears.”

Locsin has demanded Myanmar’s return to its political order before the Feb. 1 military takeover but stressed during an online forum Thursday with Australia’s Lowy Institute that Myanmar’s army is essential to its stability.

“We can’t move forward, unless you go back to the way it was,” Locsin said but added “without the army … Myanmar will become what they may give you: a hellhole of anarchy.”