In the end, the judges evaluated and concluded that the man from Brown Hill in Nevis, Astro, was most deserving and they crowned him the 2014/15 Calypso King of St. Kitts and Nevis in front of a huge audience of thousands.

It may seem like a simple matter but not so in a twin-island nation that has allowed itself to be divided by politics and inter-island animosities that sometimes go too far. Unfortunately, even in calypso competitions hosted in Basseterre and also in Charlestown, the might of the judges’ pen has been used in the past to spitefully bar either a Kittitian from winning a contest in Nevis or a Nevisian from securing victory across the Narrows in St. Kitts.

Well, all that seems to have changed and the popular calypsonian from Nevis broke the 43 year old taboo when he sang his place into history on Monday night (29th December, 2014), defeating seven other contenders, including two former kings.

Now that the crown has gone on the boat, across the channel to Nevis, the celebrations are ongoing, not only with fans of Astro, but also those who have been his biggest critics in the past, because if only for a moment, the people of Nevis are united in the victory.

Astro’s coronation was undertaken by the Prime Minister of St. Kitts and Nevis and the newly crowned National Carnival Queen, Tishima Browne.

He scored a total of 802 points from his two selections Flush it in the first round and Carnival Therapy, in the second. From since the Elimination stage, Astro had been judged the leading contender, but was followed very closely by a relatively newcomer to the scene, Lady Diva, who actually edged past him in the Semi-Finals to enter the Finals on the highest points.

This had therefore created a much needed hype as fans began to style their arguments for possible victory on Final Night, based on “it’s time for a woman to be crowned” and it is time for a Nevisian to win”.

Lady Diva however fell short on Monday night and failed to deliver the “knock out” performance that was needed and was made to settle for First Runner-up, scoring 787 points. Her songs were Cancer Free and Dear Fans.

The Second Runner-up slot was taken by the former and five time calypso king, Socrates, who announced earlier in the day that this was his last competition. He tallied 779 points and some felt that he too could have been a winner. Socrates surprised many with a stunning performance in the second round and many observers described it as the best in that round.

It was a remarkable feat for the taxi man calypsonian because he was never considered a favourite leading up to the grand finals. His songs were Holy Wars and Socra Don’t Have to Sing.

In the fourth or Third Runner-up position was another female, Queeny G, with 778 points. She was making her first appearance in the finals.

There was no place for the former king, Richie Buntin.

Other finalists were Lord Kut, Rudder and Big Lice who delivered two stinging performances especially when he came out in the second round but as he said in his lyrics, he was not paying too much attention to winning, though his were outstanding performances. Big Lice’s fans have always felt that he will be overlooked by the judges because of his hard hitting calypso songs that “attack” the government. 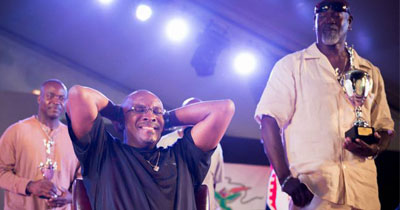 However, with this voctory for Astro, it may once again inspire other Nevisian calypsoninas like Dis N Dat, Binghi and Meeko to once again enter the contest. It could also help to ease tensions across the Narrows about the appearance of each island’s calypsonians in the various competitions.

Already, a few years ago, in 2008, Kittitian I Soursop made history when he became the first Kittitian to be crowned Calypso King for the Nevis Culturama. That however did not sit well with many Nevisians who had argued that their brothers and sisters from St. Kitts should not be allowed in the contest. It seems like it was also the sentiments in higher circles because in the past they have instituted quotas for the Kittitians and last year, 2013, they were banned from the Culturama contest.

A Kittitan wishing to participate there has to be resident on Nevis for at least one year.

So, perhaps this victory by Astro could open the calypso borders again on Nevis and perhaps it would also make it easier for Kittitians to accept a Nevisian being crowned king in St. Kitts, albeit it is a St. Kitts and Nevis contest. The good thing is thsat there were thousands of Kittitians Monday night at carnival Village who were visibly supporting Astro and celebrated when he won. Perhaps calypso might do what politicsw has not. Perhaps.

The remaining contenders Monday night were Big Lice, who made it to fifth position on 756 points, followed in the cellar by Richie Buntin on 741, Lord Kut 737 and Rudder 713.

Carnival in St. Kitts rolls on with the Caribbean Talented Teen Pageant on Tuesday night. Wednesday will be the Junior Carnival.