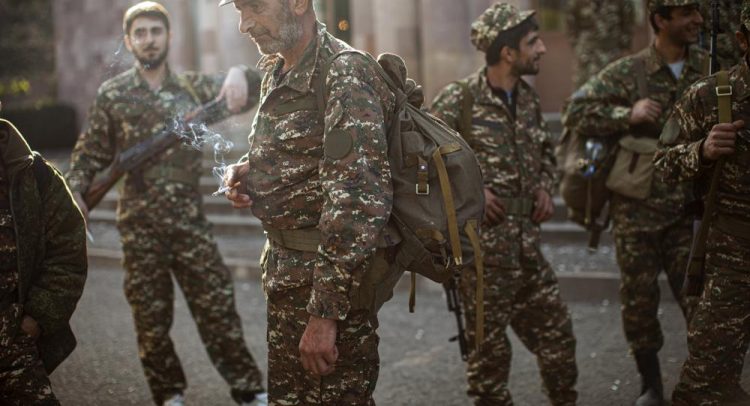 THE HAGUE, Netherlands (AP) — Azerbaijan’s deputy foreign minister accused Armenia of “ethnic cleansing” and continuing to lay landmines in Nagorno-Karabakh even after a cease-fire ended a six-week war in the disputed region late last year, as a second case related to the conflict opened at the United Nations’ top court. Armenia denied the accusations.

Last week, the court held hearings into a complaint brought by Armenia against Azerbaijan, also related to last year’s war that left more than 6,600 people dead.

The “campaign of ethnic cleansing and incitement to violence against Azerbaijanis, is ongoing,” Elnur Mammadov told the International Court of Justice.

Azerbaijan is asking the world court’s judges to order Armenia to halt the laying of landmines, provide Azerbaijan with maps of minefields to assist clearance efforts and to take measures to halt incitement by Armenian groups of racial hatred and violence against Azerbaijani citizens.

Armenian representative Yeghishe Kirakosyan urged the court to reject the requests, calling Azerbaijan’s case “an exercise in false equivalencies. A tactic engineered to create a fog of information, one designed to give the impression that Azerbaijan is the true victim.”

Mammadov said that mines laid by Armenian forces during and since the war have killed or injured at least 106 Azerbaijanis, including 65 civilians, since the conflict was ended by a Russian-brokered peace deal.

“There is no valid military or other reason for Armenia to continue to target and terrorize Azerbaijanis in this manner,” he told the court.

Kirakosyan called the claim that Armenian forces continue to lay landmines baseless and told judges that “in the context of resolving all outstanding humanitarian issues, we stand ready to provide any more maps in our possession.”

Both cases will likely take years to reach a conclusion at the Hague-based court. The hearings in recent days are focused on both countries’ requests for so-called provisional measures that the court can impose in order to prevent acts that could affect the cases. Judges will likely issue their decisions on those requests in coming weeks.

Both cases stem from a long-running territorial dispute that boiled over into last year’s war over the Nagorno-Karabakh region that is within Azerbaijan but had been under the control of ethnic Armenian forces backed by Armenia since the end of a separatist war in 1994.

Last week, Armenia accused Azerbaijan of inciting ethnic hatred and called on Baku to release prisoners from the war. Lawyers for Azerbaijan denied the claims and said Armenian forces still being held have been prosecuted or are being prosecuted for serious crimes.

FILE – In this Tuesday, Sept. 29, 2020 file photo, ethnic Armenian volunteer recruits gather at a center near Hadrut, self-proclaimed Republic of Nagorno-Karabakh, where they receive their uniforms and weapons before being dispatched to the frontline. Azerbaijan’s deputy foreign minister has accused Armenia of “ethnic cleansing” and continuing to lay landmines in Nagorno-Karabakh even after a ceasefire ended a six-week war in the disputed region late last year. His comments Monday, Oct. 18, 2021 came as a second case related to the conflict opened at the United Nations’ top court. (AP Photo/Karen Mirzoyan, File)