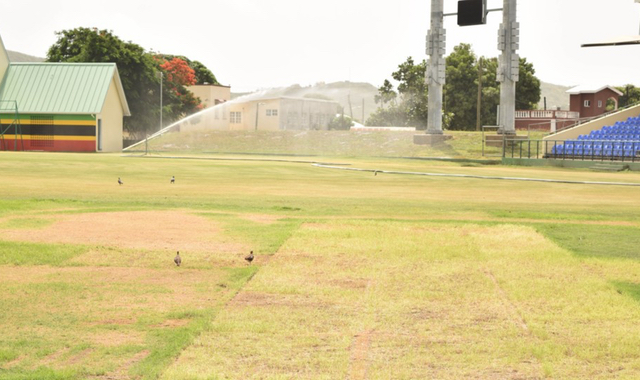 Basseterre, St. Kitts, 5th July, 2018 (MyVueNews.com) – With the end of the 2018 St. Kitts Music Festival, the venue operator at the Warner Park Cricket Stadium, where the festival was held, is now turning its attention to repairing and readying the venue for upcoming international cricket events.

A protective matting used by the Ministry of Sports has done a good job of preventing major damage to the cricket grounds, thus making it possible to have the venue ready for the first One-Day-International, 28th July to 31st July, between Bangladesh and the West Indies.

The cricket pitch was recently rebuilt by a crew of the Department of Sports. Pitch consultant Ken Crafton, working on behalf of the West Indies Cricket Board (WICB), said he is satisfied with the progress being made on the pitch.

“He is satisfied with the work being done on the pitch… There are just a few areas that we need to work on, and he is highly satisfied that we will be ready for the matches at the end of this month.”

Wiltshire disclosed, also, that repair work was done on the ‘Sky Boxes’, after pigeons, looking for safe areas to nest, did some damage to the facilities.