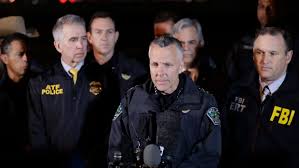 A suspect linked with a series of deadly parcel bombs targeting Austin, Texas, is dead after a major police operation, officials say.

The suspect was killed after detonating a device when officers approached his car off a highway in the city of Round Rock, north of the state capital.

FBI agents are reportedly now carrying out an investigation at the scene.

The incident follows four bomb attacks in Austin and one in Schertz, 65 miles (104km) south.

How did events unfold?

Late on Tuesday, the Austin police department used footage from a FedEx store on Brodie Lane in south Austin to identify the 24-year-old white male suspect.

After using the Google search engine to gather information on the suspect’s online browsing history, which showed searches on facilities which were used to ship packages, authorities later managed to locate his vehicle.

In the early hours of Wednesday, police and federal officers then took up positions around a parking area belonging to a hotel in Round Rock, about 20 miles (32km) north of Austin.

As they waited for tactical teams to arrive, the vehicle started to drive away, forcing officers to pursue it.

When the vehicle eventually pulled over, armed officers approached, but the suspect then detonated a bomb, injuring one officer and causing another to open fire.

Police later confirmed that it was the blast that killed the suspect, who they said could not be named until he was positively identified and the next of kin had been informed.

Austin police chief Brian Manley said that local residents should “remain vigilant”, and urged anyone who noticed a suspicious package to contact the authorities.

“We don’t know where the suspect has been over this past 24 hours,” he said, adding that it was possible that additional devices may have been distributed.

Mr Manley also praised his colleagues in a tweet. “I can’t thank the men and women of #AustinPD or our Federal partners enough for their tireless work in restoring peace to our community,” he said.

Earlier, CCTV images of a “person of interest” were shared on US media showing a white male with blond hair carrying a number of large packages at a FedEx store in Austin.

Austin has been on edge amid the attacks, which have led to the deployment of hundreds of police officers to the city.

Two people have been killed and six injured in the bombings.

What has President Trump said?

US President Donald Trump on Wednesday praised the work of the authorities in Austin.

“Great job by law enforcement and all concerned!” he tweeted.

Mr Trump said earlier that “a very, very sick individual, or maybe individuals” carried out the blasts and pledged justice for the victims.