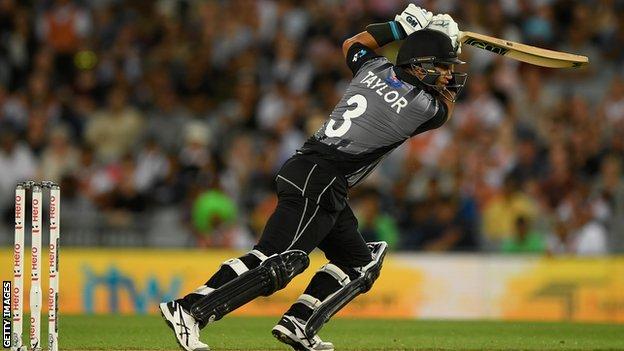 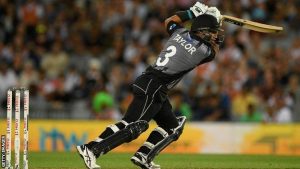 Australia won the Trans-Tasman Twenty20 tri-series with a 19-run DLS victory against New Zealand in Auckland.

Australia maintained a 100% record with their fifth victory in a series also featuring England, with their seventh win in eight matches.

New Zealand, who won only one game during the series and lost to England last weekend, begin a five-match one-day series against England in Hamilton at 01:00 GMT on Sunday.

The previous meeting between the teams, also at Eden Park, saw Guptill and Munro hit 15 sixes between them in an opening stand of 132, when Australia went on to pass New Zealand’s 243 for a record T20 run chase.

Kane Williamson opted to give his big-hitting openers the chance to post another big total on a perfectly flat wicket, with boundaries of 55m and 56m down the ground, and they started brightly in the evening sunshine with five fours and a six in the first three overs.

But Guptill mistimed a ball from giant pace bowler Billy Stanlake to mid-off in the fifth over and left-hander Munro departed in the next, misfiring to mid-on.

Warner, who heads for Australia’s four-Test tour to South Africa in the early hours of Thursday, marshalled his troops expertly, making 16 bowling changes with the five bowlers he employed.

Agar was introduced during the powerplay phase and, though his first ball was dispatched unceremoniously over mid-wicket for six by Guptill, the 24-year-old returned to dismiss Williamson and Mark Chapman within three balls in the eighth over.

Taylor came to the crease during that spell and as wickets continued to tumble he was unable to provide much acceleration to the scoring, a towering 91m six down the ground in the penultimate over one of his few highlights.

Australia close in on top ranking

Any suggestions that Australia may lose focus in pursuit of a modest target were quickly dispelled as explosive left-hander Short hit three sweetly timed sixes in four balls and reached fifty from 28 deliveries.

But when play resumed after a brief rain delay with the Australians needing 96 from 14 overs, Short hit out to long-on and Warner soon followed, beaten by a short, quicker one from leg-spinner Ish Sodhi.

Agar, who made nine in his only previous T20 international innings, was surprisingly elevated to number three and was stumped off a wide from Mitchell Santner, bringing the men with the two highest individual T20 international scores – Glenn Maxwell and Aaron Finch – together at the crease.

Man of the series Maxwell, who hit 233 runs in five matches, had made only two when he flayed at a wide one and sliced to point but Taylor was unable to cling on over his shoulder.

Finch would have been easily run out for five by a superb sliding stop and throw in one movement from Williamson which narrowly missed the stumps.

There was time for an enormous trademark Maxwell six down the ground, but with 30 required from 32 balls there was a much heavier rain shower and play could not resume within the allotted time frame.

Australia, who have never won the World Twenty20 in six attempts, were sufficiently far enough ahead in their 100th international for a victory which takes them to 125.65 points in the International Cricket Council world rankings, 0.19 behind Pakistan.

Their only note of concern was an injury to Chris Lynn, who dislocated his right shoulder while diving in the field.

George Clooney and Oprah donate $500,000 each to Washington march against gun violence