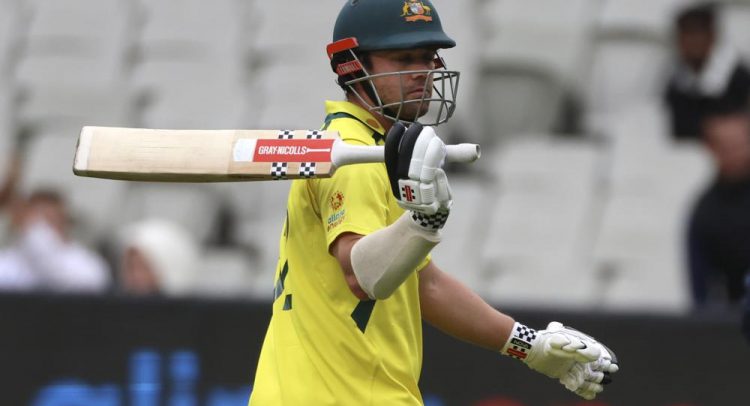 MELBOURNE, Australia (AP) — Travis Head and David Warner led Australia to a 221-run rain-affected victory over England to secure a 3-0 win in the one-day international series that ended Tuesday at the Melbourne Cricket Ground.

Australia’s opening pair scored 269 runs in front of just 10,406 spectators at the MCG.

Warner and Head’s centuries helped Australia post 355-5 — the highest ODI total at the MCG — after England captain Jos Buttler won the toss and elected to field.

Head hit 152 from 130 balls to bring up his third ODI century and highest score in the format. Warner scored 106.

Two rain delays during Australia’s innings reduced the game to 48 overs per side, with England’s target lifted to 364. England was all out for 142 in the 32nd over as opener Jason Roy top-scored with 38.

Fast bowler Olly Stone, who was playing in just his sixth ODI, led England’s bowlers with figures of 4-85. Australian legspinner Adam Zampa had 4-31 to finish the series with 11 wickets.

“Good to finish them off here with just about the best ODI I’ve been part of,” Australia captain Pat Cummins said,

Buttler said his side “fell a long way short . . . I thought Australia outplayed us in every department.”

Australia won the first match in Adelaide by six wickets and the second at the Sydney Cricket Ground by 72 runs to clinch the series ahead of the final match.

Australia’s Travis Head walks off after he is bowled by England’s Olly Stone during their one-day international cricket match at the Melbourne Cricket Ground in Melbourne, Australia, Tuesday, Nov. 22, 2022. (AP Photo/Asanka Brendon Ratnayake)