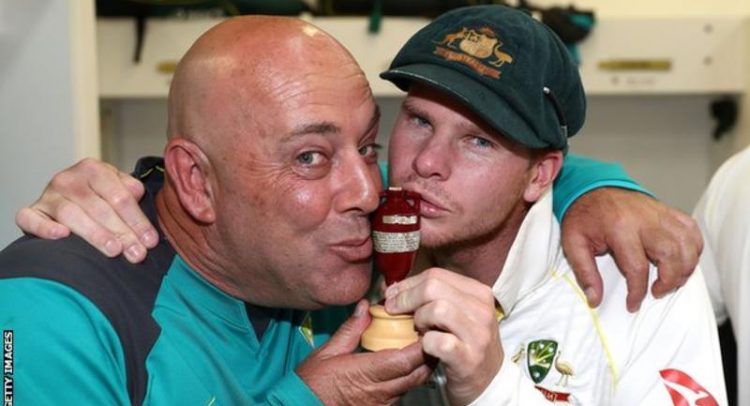 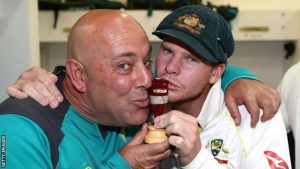 Darren Lehmann is to quit as head coach of Australia at the end of the current Test series against South Africa.

The 48-year-old will step down after the final Test in Johannesburg, which starts on Friday, in the wake of the ball-tampering scandal.

Lehmann, who was cleared of any wrongdoing by Cricket Australia, had said on Wednesday he would not resign.

Former skipper Steve Smith plus batsmen David Warner and Cameron Bancroft were banned for their part in the scandal.

Lehmann made his decision after watching Smith and Bancroft deliver emotional apologies at news conferences earlier on Thursday.

“After viewing Steve and Cameron’s hurting, it’s only fair that I make this decision,” said Lehmann, who was contracted until the 2019 Ashes. “I’m ultimately responsible for the culture of the team.

“This will allow Cricket Australia to complete a full review into the team and allow them to implement changes to regain the trust of the Australian public. This is the right thing for Australian cricket.

“It’s been a wonderful experience coaching the Australian cricket team. I hope the team rebuilds from this and the Australian public finds it in their hearts to forgive these young men.”

He added: “They’ve made a grave mistake but they are not bad people.”

Lehmann was appointed head coach in 2013, losing his first Ashes series in England 3-0 before regaining the urn with a 5-0 win five months later. Australia also beat England 4-0 down under this winter.

The team won the 2015 World Cup under his leadership and dealt with the death of batsman Phillip Hughes in November 2014.

Asked what his proudest moment in charge was, he replied: “I would say the way we dealt with Phillip Hughes’ passing. We’re only playing a game.”

Cricket Australia chief executive James Sutherland said Lehmann had “provided fantastic service” to the team, adding: “His work ethic has been terrific and he genuinely cares for and loves his players.”

Sutherland, who also said he would not be resigning from his role, hopes to have replaced Lehmann before Australia’s limited-overs tour of England this summer. The first one-day international is at The Oval on 13 June.

During the third Test in Cape Town, television footage caught Bancroft take a piece of sandpaper out of his trouser pocket before rubbing the ball.

Smith said a “leadership group” had known of the plan in advance and Cricket Australia’s investigation found Warner instructed Bancroft in how to carry it out.

Smith and vice-skipper Warner have been banned for a year by Cricket Australia, while Bancroft was given a nine-month ban.

The three had already been sent home from Australia’s tour before the final Test.

Smith, 28, and Bancroft, 25, have also been suspended from captaining Australia for at least the next two years.

Warner, 31, will not be considered for any team leadership positions in the future