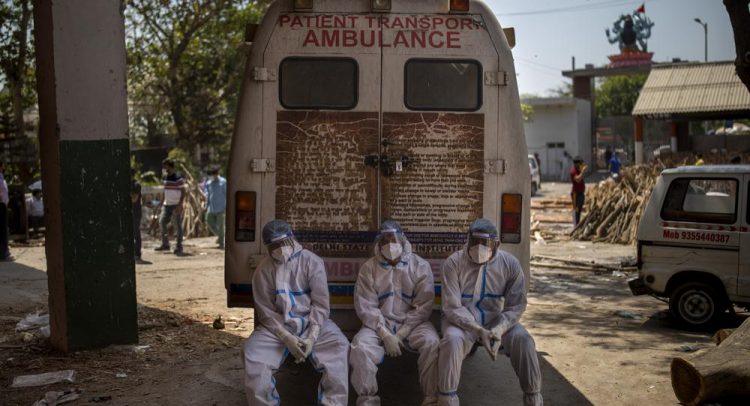 SYDNEY (AP) — At least 38 Australians involved in the Indian Premier League are in limbo after the lucrative cricket tournament was suddenly postponed because of surging coronavirus cases at a time when they’re banned from traveling home.

Cricket Australia and the players’ union held a joint news conference Wednesday to say they’re working with IPL organizers to get players, coaches and commentators out of India as soon as possible.

Some of the biggest stars in Australian cricket are involved in the IPL, including pace bowler Pat Cummins and batters Steve Smith and David Warner.

Australian Cricketers’ Association chief executive Todd Greenberg said the decision by the Australian government to temporarily ban flights from India was creating anxiety, despite the players being aware in advance of potential problems associated with traveling during the pandemic.

“They signed up with their eyes wide open about some of the challenges and risks,” Greenberg said. “What they didn’t expect was the borders to be closed. So that created anxiety for them, just like it would create anxiety for the 9,000-odd Australians who are over there looking to come home.

“They’re very hopeful that the government will reopen after May 15, but we’re under no illusion that that’s a decision the government has to make — and hopefully they will — to not only get our cricketers home but to get more Australians home as well.”

India is in the grip of a devastating surge that has overwhelmed hospitals struggling to secure oxygen supplies. The IPL was postponed indefinitely on Tuesday when players or staff from three of the eight franchises returned positive tests for COVID-19.

Cricket Australia interim chief executive Nick Hockley said the Australian players in India would likely be relocated to a nearby country such as Maldives or Sri Lanka until they can get a charter flight home.

The players will then also be subject to a further two weeks in quarantine, which is mandatory for all travelers arriving in Australia.

“Our hearts go out to everyone in India,” Hockley said. “The IPL … they’ve come to the decision over the last 24 hours that is in the interests of the health and safety of everyone to suspend the tournament indefinitely.

“I can’t speak more highly for how the BCCI, but also all of the franchises, have worked to look after our players and put in plans to make sure that they get home safely and as quickly as possible.”

Australian Prime Minister Scott Morrison is resisting mounting pressure to lift the temporary ban on flights from India, saying any early resumption of arrivals from a pandemic hot spot would erode the country’s quarantine capability.

Lawyers are planning a legal challenge to the government’s ability to prevent around 9,000 citizens and permanent residents from returning to Australia from India.

Eight of the 11 English players who had been playing in the IPL flew back to London on Wednesday and will begin a 10-day quarantine in government-approved hotels.

Chris Jordan, Dawid Malan and Eoin Morgan, who all play for Punjab Kings, are expected to leave Ahmedabad within 48 hours.

FILE – In this April 24, 2021, file photo, exhausted workers who carried the dead for cremation sit on the rear step of an ambulance in New Delhi, India. As deaths mount and a vaccine rollout falters badly, Prime Minister Narendra Modi has pushed much of the responsibility for fighting the outbreak onto unprepared and poorly equipped state governments. The crisis has badly dented Modi’s carefully cultivated image as an able technocrat. (AP Photo/Altaf Qadri, File)

Dr. Cuthbert Sebastian Jr. to address COVID-19 related matters on Working for You on Wednesday, May 5