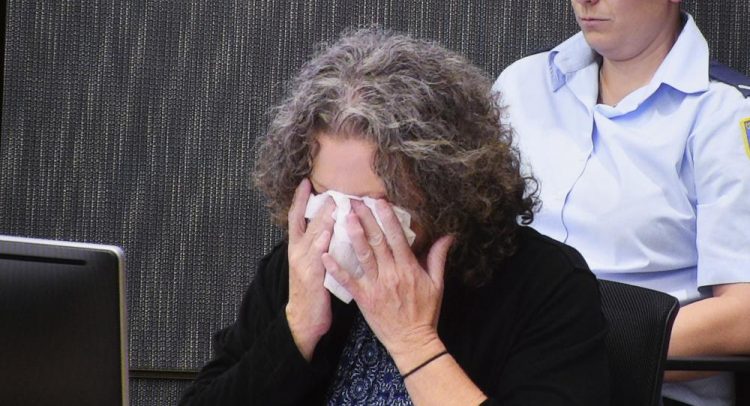 CANBERRA, Australia (AP) — Nearly two decades after an Australian woman was convicted of killing her four children, dozens of scientists are backing the claim that they may have died of natural causes.

Australian law says Kathleen Folbigg is one of the nation’s worst female serial killers who smothered her four children over a decade. But a growing number of scientists say she could be the victim of a tragic miscarriage of justice.

The schism between legal and scientific opinion has grown with advancements in genetic research in the 18 years since Folbigg was convicted on three charges of murder and one of manslaughter.

Now the 53-year-old’s freedom hinges on a petition to the New South Wales state governor for a pardon “based on significant positive evidence of natural causes of death” in all four cases.

The petition lodged in March carries the signatures of 90 scientists, medical practitioners and related professionals including two Nobel laureates.

But breakthroughs in science have yet to overcome judges’ verdicts on Folbigg’s credibility.

Folbigg took her latest blow from the courts weeks after the petition. Three judges threw out her challenge to retired Justice Reginald Blanch’s decision in 2019 to uphold her convictions. Her appeal had been based on new scientific evidence including the children’s genome sequencing.

After her court defeat, Folbigg said in a statement written from prison through her friend Tracy Chapman that the verdict and the petition raised “valuable questions about how we got here.”

“Many international eyes are now on this case and there’re many more Australians rightly asking why Kath’s still in prison after 18 years when there’s mounting scientific evidence relating to her innocence,” Chapman wrote on behalf of her childhood friend.

The three appeal court judges found that there was ample evidence for Blanch to conclude Folbigg was guilty.

Folbigg’s lawyers brought reports of 10 medical and scientific experts to Blanch’s inquiry. Prosecutors brought nine experts of their own.

“This was not a case in which the … conclusion was at odds with scientific evidence,” the judges wrote of Blanch’s findings.

But signatories of the petition for a pardon disagree.

The Australian Academy of Science President John Shine accused the three appeals court judges of adopting the same “incorrect conclusions about the genetic evidence” as Blanch.

“It is deeply concerning that there is not a mechanism to appropriately weigh up all medical and scientific evidence in a case of this nature,” Shine said. “There is now an alternative explanation for the death of the Folbigg children that does not rely on circumstantial evidence.”

Folbigg’s story is considered by many too tragic to be put down to bad luck alone.

Her first child Caleb was born in 1989 and died 19 days later in what a court determined to be the lesser crime of manslaughter. Her second child Patrick was 8 months old when he died in 1991. Two years later, Sarah died aged 10 months. In 1999, Folbigg’s fourth child Laura died at 19 months. Folbigg was the first on the scene of each tragedy.

An autopsy found Laura had myocarditis — an inflammation of heart muscle that can be fatal.

Patrick suffered epilepsy and his death had been attributed to an airway obstruction due to a seizure and an infection. The other two were recorded as sudden infant death syndrome, or SIDS.

In 2003, Folbigg was convicted for all four deaths and was sentenced to 30 years in prison with a non-parole period to 25 years.

Pediatric geneticist Jozef Gecz, who signed the pardon petition, acknowledged the evidence of natural causes was stronger in the girls’ deaths than the boys. But he said investigations were continuing into potential leads to genetic causes of the boys’ deaths.

Despite scientific breakthroughs, Gecz said the legal fraternity still embraced so-called Meadow’s Law, a discredited maxim attributed to British pediatrician Roy Meadow, who said: “One cot death is a tragedy, two cot deaths is suspicious and, until the contrary is proved, three cot deaths is murder.”

“We know now from a lot of our work with families who are unfortunate in that they carry genetic risk that it does happen,” said Gecz, who works with children suffering rare and fatal disabilities.

In 2015, Folbigg’s lawyers successfully petitioned the then governor for a judicial investigation of her convictions based on concerns raised by several forensic pathologists.

Attorney General Mark Speakman said he instructed the governor to hold Blanch’s inquiry “to ensure public confidence in the administration of justice.”

Blanch concluded that Folbigg was “untruthful” and “unbelievable” in her attempts to obscure her guilt.

Blanch had also heard fresh evidence from Carola Vinuesa, co-director of the Australian National University’s Center for Personalised Immunology, that both girls and their mother shared a recently discovered genetic mutation that is linked to abnormal heartbeats and sudden death in children.

Last year, 27 scientists from Australia, United States, Canada, France, Denmark and Italy had their findings describing the genetic mutation in the Folbigg girls and its functional validation published by Oxford University Press in the peer-reviewed cardiology journal Europace.

The team also reported the boys carried different and rare variants of a gene that when defective, causes mice to die young from epileptic fits.

Further investigation was required to determine whether these variants might account for Patrick’s epilepsy and blindness, the study found. The study led to the latest petition.

The criminal case against Folbigg was circumstantial and relied on interpretations of vague entries she had made in diaries, one of which her estranged husband Craig Folbigg read and reported to police.

The entries included: “Obviously, I am my father’s daughter.” That was a reference to Thomas Britton who stabbed Folbigg’s mother to death in 1968 when Folbigg was 18-months-old.

Under cross-examination in 2019, Folbigg denied a prosecutor’s suggestion that the diary entry meant she had “inherited the sin of killing” from her father.

“I believed and thought at the time that my father’s actions ruined my life and my life never seemed to go right from there,” Folbigg said. “Was I paying a price?”

Folbigg wrote after the third child’s death that “she left. With a bit of help.”

But Folbigg denied she had provided the “help” that killed Sarah.

“That was a reference to God or to some higher being or higher power,” Folbigg said in a 2018 phone call from prison.

A prosecutor told Folbigg during the 2019 inquiry that her reference to “a bit of help” was one of the diary extracts that came closest to an admission that she had killed Sarah.

Folbigg replied: “I say it’s me admitting how badly responsible I felt and I will always feel that way.”

While the application for a pardon will be decided by the governor, she will act on Speakman’s advice.

Chapman, Folbigg’s faithful friend since their first year in school, said she expected new genetic evidence would further support the proposition that epilepsy played a part in both boys’ deaths.

“This is not the end of it, no way. The kids must rest in peace,” Chapman said.

Kathleen Folbigg wipes tears away during question about the deaths of her four children as she appears via video link at the NSW Coroners Court in Sydney, Australia on April 29, 2019. Nearly two decades after Folbigg was convicted of killing her four children, dozens of scientists are backing the claim that they may have died of natural causes. (Peter Rae/AAP Image via AP)