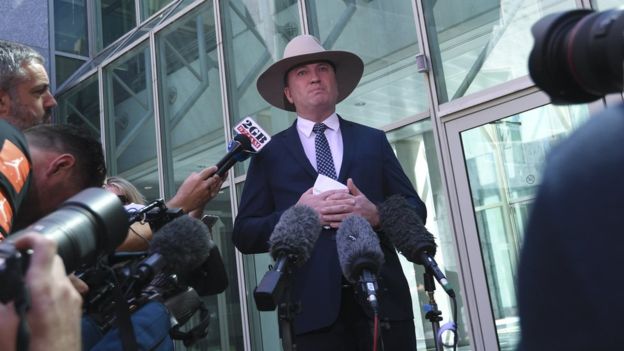 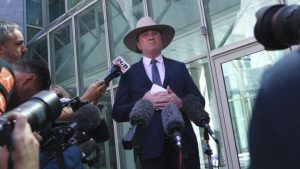 Barnaby Joyce says he will resign as Australia’s deputy prime minister following a politically damaging saga that began with his affair with a former staffer.

Mr Joyce said he would step down on Monday as leader of the Nationals, the junior government partner.

He had previously resisted calls to quit amid intense scrutiny over his ministerial conduct.

The scandal has dominated Australian politics for more than two weeks.

He described his decision on Friday as a “circuit-breaker” for his family and new partner, with whom he is expecting a baby in April.

“This current cacophony of issues has to be put aside,” he told reporters.

Prime Minister Malcolm Turnbull issued a statement shortly after thanking Mr Joyce for being “a fierce advocate for rural and regional Australia”.

Rumours of an affair started to spread after Mr Joyce and Vikki Campion, his former media adviser, were photographed together at a bar in Sydney in February 2017.

In the following months, Mr Joyce was described by his Nationals colleagues as becoming “a mess”.

In an interview with Australia’s Fairfax Media newspaper on Wednesday, the couple called for scrutiny of their relationship to stop, appealing to the media and the public to “move on”.

Mr Joyce also said he was concerned and “deeply annoyed” at the thought that their child might be perceived as “somehow less worthy than other children”.

He has previously apologised to Natalie, their four daughters and Ms Campion for the public manner in which the scandal has played out.

He has described the breakdown of his marriage as one of “the greatest failures of my life”, while Mrs Joyce described the situation as “devastating”.

On Friday, Mr Joyce said he hoped his decision would help his family. “This has got to stop. It’s not fair on them,” he said.

Why did Joyce come under political pressure?

The revelation of the affair led to questions over whether Mr Joyce had misused his position in parliament to conduct his relationship with Ms Campion.

He said he faced a “litany of allegations” in the weeks after a newspaper exposed the affair.

Political opponents also questioned him after two unadvertised jobs within his party were taken up by Ms Campion last year, and over whether he sought a gift of free housing from a businessman.

Last week, he sparred publicly with Mr Turnbull after the PM criticised his “shocking error of judgement” and declared that ministers would be banned from having sex with their staff.

The prime minister ordered his deputy, who later accused him of being “inept”, to take leave in order to concentrate on his personal life.

Meanwhile, Mr Joyce also vigorously denied a sexual harassment complaint that was made against him by another woman.