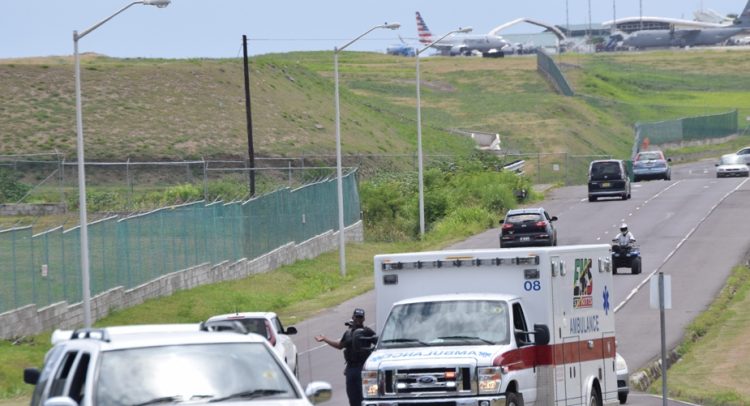 Basseterre, St. Kitts, June 12, 2018 (SKNIS): Airport authorities could be meeting as early as this week to tweak their emergency response plan after it was tested over the weekend.

St. Christopher Air and Sea Ports Authority (SCASPA) officials at the Robert Llewellyn Bradshaw (RLB) International Airport took the lead in executing a simulation of a plane crash on Saturday, June 09, during which they were able to successfully test their emergency response plan. The activity fell under the human assistance and disaster relief component of the Tradewinds 2018 exercise currently taking place in St. Kitts and Nevis. In the simulation, the circumstances were that a Boeing 763 aircraft, with 290 passengers and crew members was en route to Antigua and Barbuda from Puerto Rico and made a crash landing just short of the runway after both engines failed. The scene was set with the use of actors who played the roles of victims, a container for part of the fuselage and piles of crates that were set ablaze as the flaming scattered debris.

The objectives of the drill were many, but chief among them were to test emergency response procedures, response times and mechanisms for several groups and entities including Air Traffic Controllers, Fire and Rescue Services, Emergency Medical Services, Police and Airport Security. The activity was also meant to assess mass casualty protocols at the RLB International Airport, multi-agency response and coordination, victim transporting capabilities for the hospital, as well as the activation and management of the Emergency Operating Centre (EOC).

Airport Manager at the RLB International Airport, Ellsworth Warner, described the simulation as an opportunity for airport authorities to check the readiness of their emergency plan. Mr. Warner disclosed that he and his team would be meeting soon to discuss the way forward.

“It was an opportunity for us to really see where we are and actually work towards improvement. So I’m not feeling bad about anything, it was a great opportunity to measure ourselves and to move on….we have a lot of work to do and we have to do them as quickly as possible because they are very crucial in some areas…,” Mr. Warner said.

He also encouraged members of the public to expose themselves to training in responding to disasters as well.

“They need to know that disasters are possible and so even they themselves can get involved, get some training, and be part of the whole operation if it does happen. They don’t have to be a part of SCASPA, but they can get some training wherever they work, whatever they do and in cases like this they can come in and provide assistance,” said the airport manager.