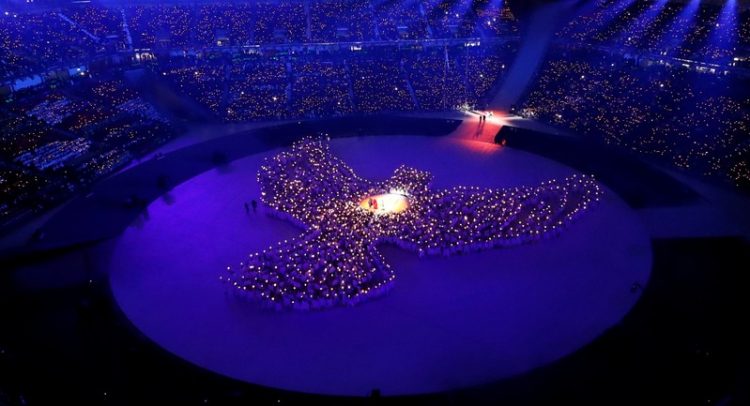 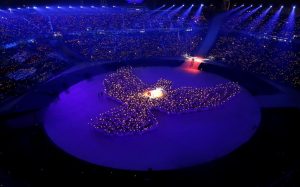 The Winter Olympics sparked to life in a vivid, colorful ceremony of fire and ice in South Korea on Friday, though the diplomacy was tougher to choreograph in the stadium where leaders from nations that are sworn enemies sat close together.

South Korea, which is using the Pyeongchang Games to break the ice with North Korea, seated its presidential couple alongside U.S. Vice President Mike Pence and his wife, with two of the North’s most senior officials sitting in the row behind.

President Moon Jae-in, who wants to harness the Olympic spirit to pave the way for talks over the North’s weapons program, warmly shook hands with North Korean leader Kim Jong Un’s smiling sister as well as the North’s nominal head of state.

The South is still technically at war with the North after the 1950-53 Korean War ended in a truce, and the United States and North Korea have recently swapped nuclear threats. Pence vowed only this week to tighten sanctions on the North.

Underlining Moon’s efforts to re-engage with the North, the opening ceremony followed the story line of children wandering through a mythical landscape and discovering a world where people live in peace and harmony.

International Olympic Committee President Thomas Bach told the crowd that by allowing their athletes to march together under one flag at the ceremony, North and South Korea had shown sport’s “unique power” to unite people.

“All the athletes around me, all the spectators here in the stadium, and all Olympic fans watching around the world … we are all touched by this wonderful gesture,” he said.

The Olympics have provided some respite from years of tense relations between Seoul and Pyongyang, though just hours before the ceremony hundreds of anti-North Korean protesters scuffled with riot police outside the stadium, burning North Korean flags and pictures of its leader, Kim Jong Un.

South Korea’s frigid February, where temperatures have plummeted to minus 20 degrees Celsius (-4 Fahrenheit) at night, has come as a shock to the system for athletes and visitors alike in the leadup to these Games, prompting concerns about hypothermia at the opening ceremony.

The weather was a little milder than feared on Friday, but spectators still huddled near heaters, holding hot packs and slurping down steaming fishcake soup to ward off the chills.

Bundled up in a scarf, mask and knitted hat, with hot packs tucked into her knee blanket, office worker Shin Hye-sook said she and her three colleagues were coping with the cold.

“We’re sitting as close as we can and trying not to move a lot to save our energy,” said the 60-year-old.

Pyeongchang has waited a long time for this moment.

The alpine town first bid for the 2010 Games but narrowly lost out to Vancouver, and suffered similar heartbreak when it was beaten to the 2014 Olympics by Sochi.

After announcing its arrival on the international stage by hosting the 1988 Seoul Olympics, South Korea now wants to show the world just how far it has come over the last 30 years with a Games showcasing its culture and technological prowess.

According to Olympic tradition, the Greek contingent headed the parade of athletes into the open-air stadium, followed by the other delegations in order according to the Korean alphabet.

Pence stood to welcome the U.S. athletes as the Korean pop hit Gangnam Style blared around the stadium, sparking the ‘Horse Dance’ in the crowd and among the volunteers.

The moment failed to elicit even a smile from the two senior North Korean officials in the VIPs box, however, as they sat stony-faced in black fluffy hats and long coats.

Elsewhere in the stadium, a Kim Jong Un impersonator was not made as welcome as the North Koreans in the VIP box and was ejected by security. “Well is my sister getting the same treatment?” he demanded to know.

As the athletes made their way around the track, one of the biggest cheers was reserved for muscle-bound Tongan Pita Taufatofua, who repeated his famed Rio Games entrance by marching in shirtless, oiled up and wearing a traditional skirt — this time in sub-zero temperatures.

Later, the crowd erupted as athletes from North and South Korea marched together under the unification flag for the first time at an Olympics since 2006.

Digicel's new boss says he is listening and making changes