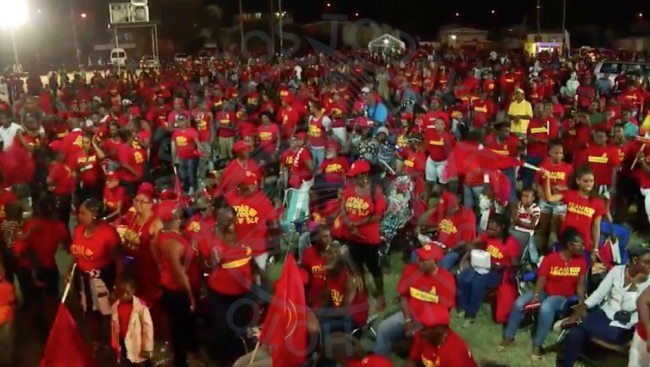 Bajans have one choice on Thursday, says Colin Jordan The Democratic Labour Party (DLP) administration made several bad choices which are affecting the people of Barbados.

This was the declaration tonight of Barbados Labour Party (BLP) St Peter hopeful Colin Jordan who was addressing party faithful during a meeting at Silver Sands, Christ Church in an atmosphere that was a mixture of political messaging and entertainment.

He said a similar decision was taken to build a new multimillion-dollar headquarters for the Barbados Water Authority but was unable to deliver a consistent supply of water to the people in the north of the island.

Citing decisions of the administration to impose tuition fees and the severing of thousands of public workers, Jordan called on the electorate to reject politicians who did not care about them but concentrated wealth in the hands of one man he described as the “billion-dollar man”- a reference to a frequent BLP target and businessman Mark Maloney.

Weir said the election will be historic and would usher in the country’s first female Prime Minister in Mia Mottley.

“We will revolutionize the way Barbados is run” he said adding that free education up to the tertiary level would be restored.

Another speaker and first-time candidate John King declared that Thursday’s poll was about the survival of Barbados. The St Philip West candidate, who will be coming up against Minister of Agriculture Dr David Estwick, called on BLP supporters to go out to polling stations early and cast their votes in favour of the opposition party.

“We can’t do the job alone,” King said, pleading with party faithful not to believe the win was already in the bag