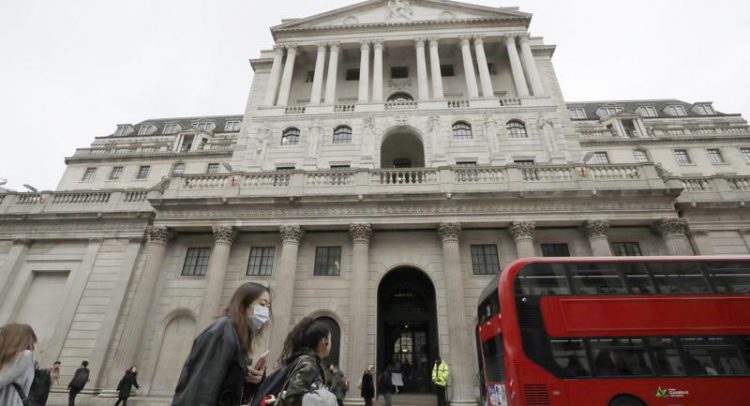 Bank of England expects best year for UK economy since 1941

LONDON (AP) — The Bank of England has kept interest rates on hold as it forecast the fastest annual pace of growth for the British economy since early on in World War II, largely as a result of the rapid rollout of coronavirus vaccines.

In a prepared statement Thursday, the nine-member Monetary Policy Committee said it will maintain the bank’s main interest rate at 0.1%. The unanimous and widely anticipated decision means that interest rates will remain at the lowest level in the bank’s 327-year history.

Alongside its decision, the bank’s rate-setting panel said growth is likely to be greater than it previously thought as lockdown easing and vaccines free people to spend savings built up during the pandemic.

“New COVID cases in the United Kingdom have continued to fall, the vaccination programme is proceeding apace, and restrictions on economic activity are easing,” Bank Governor Andrew Bailey told reporters in a conference call.

After suffering its worst recession in over 300 years, the U.K. economy is projected to grow by 7.25% in 2021, up from the bank’s previous forecast of 5%. That would be the greatest economic rebound since 1941 when the U.K. was on a war footing, according to Bank of England statistics that date back to 1700.

Because it anticipates growth will occur earlier than expected, it has revised down its forecasts for next year. It is now expects 5.75% growth in 2022, instead of the 7.25% previously predicted.

If growth returns as quickly as the central bank expects, the British economy will make up all the ground lost during the pandemic by the end of this year. The bank also said economic growth will help reduce the anticipated peak in unemployment from 7.75% to 5.5%.

Bailey cautioned against euphoria, noting that the pandemic will leave a long-term “scarring” effect on the British economy. He also warned of “downside risks” to the economic outlook from a potential resurgence of the virus and the possibility that new variants may be resistant to the vaccine.

“Let’s not get carried away,” Bailey said. “It still means that two years of output growth have been lost to date.”

If pre-pandemic trends persisted, that would equate to around 3% of output lost during the pandemic.

“So there will still be a big gap between where the economy is and where it should be at that point,” said Luke Bartholomew, senior economist at Aberdeen Standard Investments. “It is this gap that will keep monetary policy very accommodative over the next few years even as the economy posts some extremely strong growth numbers, and inflation picks-up somewhat in the short run.”

Though few expect the bank to raise interest rates anytime soon, it signaled Thursday that it is willing to ease its quantitative easing program by slowing the rate of its monthly bond purchases, though the total remains unchanged.

The bank’s brighter outlook comes despite a tough winter period when lockdown restrictions were reimposed in the face of a particularly acute second wave of the virus.

Though the U.K. had Europe’s highest virus-related death toll at more than 127,500, new cases are now at their lowest levels since last summer and the vaccine rollout has been lauded. By Wednesday, around 52% of the British population had received at least one dose of vaccine with around a quarter getting two.

FILE – In this Wednesday, March 11, 2020 file photo, pedestrians wearing face masks pass the Bank of England in London. The Bank of England said Thursday May 6, 2021, it will keep interest rates on hold and has grown more optimistic about the economic recovery in the U.K. as a result of the rapid rollout of coronavirus vaccines. (AP Photo/Matt Dunham, File)