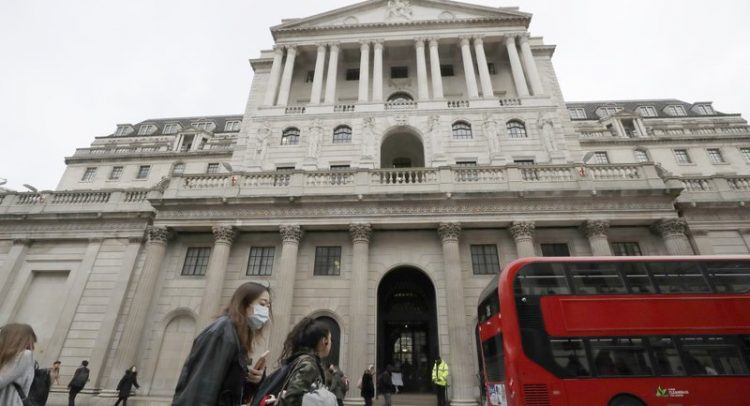 Bank of England says economy will take time to heal

LONDON (AP) — The Bank of England predicted Thursday that the economic downturn in the U.K. economy might be less severe than it thought at the start of the COVID-19 pandemic – even as it warned it would take a longer time to heal the scars.

The central bank opened the door to providing more monetary stimulus as Britain reopens after the pandemic lockdowns and said the economy probably won’t return to pre-pandemic levels until the end of 2021 as spending by consumers and businesses remains weak.

It also expressed concern about rising rates of unemployment – particularly at a time in which no one knows what will happen next.

“The outlook for the U.K. and global economies remains unusually uncertain,″ the bank said in a statement. “It will depend critically on the evolution of the pandemic, measures taken to protect public health, and how governments, households and businesses respond to these.″

The central bank’s Monetary Policy Committee kept its benchmark interest rate at a record low 0.1%. It also kept its target for buying government and corporate bonds – by which it injects money into the economy – at 745 billion pounds ($980 billion).

The decisions on rates and economic stimulus were widely expected as the uncertainty over the pandemic could require more action later, economists say.

The figures are more optimistic than its predictions issued in May for a 14% drop in the economy this year.

Still, Bank of England Governor Andrew Bailey suggested much was not straightforward.

“The forecast central case … looks quite beguilingly simple,″ Bailey said, adding inflation and other measures are forecast to return to target eventually. “And yet we’ve got huge uncertainty and a very big downside risk… There are some very hard yards, to borrow a rugby phrase, to come.″

The minutes of the committee’s meeting showed that policymakers were particularly concerned that the rise in unemployment during the pandemic could prove to be more persistent than expected. The bank forecast that the unemployment rate would rise to 7.5% this year, from 3.75% in 2019.

Policymakers also said they were concerned the recovery may slow if uncertainty over the pandemic leads some households and businesses to hold off spending.

“The committee will continue to monitor the situation closely and stands ready to adjust monetary policy accordingly to meet its remit,″ the policymakers said.

Some analysts were surprised by the centra bank’s assessments.

“The Bank of England’s overly optimistic updated economic projections leave the door wide open for more monetary stimulus later this year,″ wrote Kallum Pickering, senior economist at Berenberg bank, in a note that began with the headline “Verging on unrealistic.″

“Relative to the obvious challenges ahead linked to the COVID-19 pandemic, highlighted by the recent re-imposition of modest containment measures in major parts of the U.K., the V-shaped recovery that the Bank of England continues to project seems unlikely, to put it mildly.″