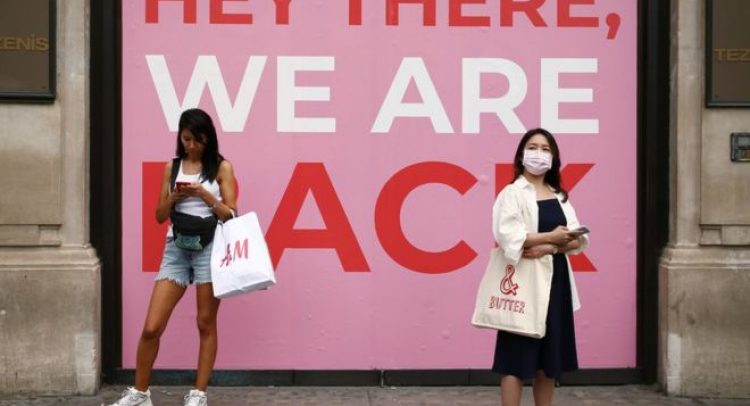 The Bank of England will pump an extra £100bn into the UK economy to help fight the “unprecedented” coronavirus-induced downturn.

Bank policymakers voted 8-1 to increase the size of its bond-buying programme.

However, they said there was growing evidence that the hit to the economy would be “less severe” than initially feared.

The UK economy shrank by 20.4% in April, while official jobs data showed the number of workers on UK payrolls fell by more than 600,000 between March and May.

The Bank said more recent indicators suggested the economy was starting to bounce back.

Minutes from the MPC’s June meeting said: “Payments data are consistent with a recovery in consumer spending in May and June, and housing activity has started to pick up recently.”

However, Mr Bailey warned that the outlook for the economy remained uncertain. He said: “We don’t want to get too carried away by this. Let’s be clear, we’re still living in very unusual times.”

The minutes added: “While recent demand and output data had not been quite as negative as expected, other indicators suggested greater risks around the potential for longer-lasting damage to the economy from the pandemic.”

Back in May, policymakers warned the economy was heading for its sharpest recession on record.

Scenarios drawn up by the Bank suggested the economy could shrink by 25% in the three months to June.

However, the MPC said more recent evidence suggested the contraction would be less severe.

The extra monetary stimulus – known as quantitative easing (QE) – will raise the total size of the Bank’s asset purchase programme to £745bn.

Policymakers said the injection would help to support financial markets and underpin the recovery.

However, Andy Haldane, the Bank’s chief economist, voted against the increase.

He said the recovery was happening “sooner and materially faster” than the Bank expected in May.

Slow recovery
Policymakers said the jobs market was likely to remain weak for some time, with a risk of “higher and more persistent unemployment”.

Millions of workers have already seen their pay packets shrink as a result of lower pay for furloughed employees. A survey by the Bank said other companies had postponed or cancelled pay rises this year.

Mr Bailey said: “Even with the relaxation of some Covid-related restrictions on economic activity, a degree of precautionary behaviour by households and businesses is likely to persist. The economy, and especially the labour market, will therefore take some time to recover towards its previous path.”

Mr Bailey said weak inflation had been by driven by falling oil and energy prices, as well as a global drop in economic activity.

The Bank expects inflation to return to target within two years.

“Unemployment looks set to rise sharply in the second half of this year and to fall back slowly thereafter,” he said.

“The resulting prolonged weakness in domestically generated inflation likely will necessitate the MPC doing more to stimulate the economy in the winter.”