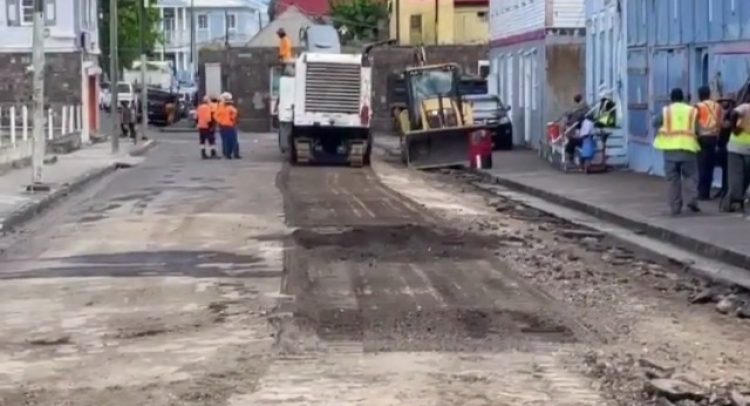 Bank Street getting a much-needed facelift

Basseterre, 8th March, 2022, (MyVue News. com)-Traffic in the downtown area of Basseterre has been severely affected by the closure of Bank Street, but this time, it is an inconvenience that many welcome, because the action being taken, is one that had been called for by both motorists and pedestrians.

The Department of Public Works has informed the public that the road has been closed to vehicular traffic, to facilitate repairs they are carrying out in that area.

The project is expected to last until 21st March.

Minister of Infrastructure, Shawn Richards, indicated that his ministry had been inundated with concerns raised by many, who said that the road was very “bumpy” and uncomfortable to drive on. Though there were no potholes, Richards said that the surface was indeed not in a good state and action had to be taken.

The work, however, comes as a part of a comprehensive road rehabilitation and development initiative that Richards and his ministry have been pursuing in recent years. The program included the resurfacing of the island’s main road and the redevelopment of the Old Road Bay project.

Richards describes both projects as two of the most comprehensive in the history of the country.

Richards, who is said to have been leading these initiatives from the front, has also been pursuing other road works in Basseterre and the rural areas, as well as undertaking enhancement work on bridges across the island.

The resurfacing of Bank Street, therefore, falls in line with the aggressive program to improve the island’s road network.