This comes as the Antioch Baptist Church celebrates its 50th Anniversary, highlighting the contribution that they have made to nation building in many areas of social endeavour.

Among the major events is a Parade of Saints, scheduled for Friday 8th March, when the Founding Fathers of the church will be presented with awards in recognition of their exceptional work in the launch of the ministry.

An awards dinner is also planned for this Saturday 9th March, at the Marriott Hotel, in Frigate Bay. 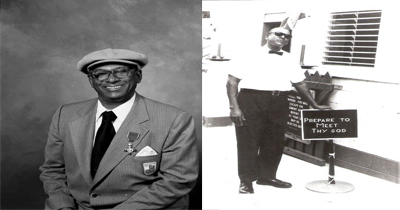 The Baptist Church was launched in St. Kitts and Nevis on 5th March, 1963 by the late founding pastor, Dr. William Connor. Connor, who at the age of eleven (11), discontinued his formal education, left primary school to work in the cotton fields before eventually becoming the Sexton at the St. George Anglican Church, at a later age. It was from here that Connor gradually made his preparations to establish the Baptist Faith in the Federation.

It is said however that initially Dr. Connor’s first passion was planted in the desire to build a movement of Sunday Schools throughout the island of St. Kitts, concentrating mostly in the rural parts of the island. It was therefore not surprising that sister churches to Antioch, were later established in Lodge and St. Pauls.

Connor who was well respected by people of all walks of life is credited also for the work of his ministry in helping the poor and providing assistance for education while equally helping families with items of clothing.

But Connor was more than that, as he worked with families in various communities to ensure that children stayed in school and construct a meaningful way forward for their future. He expected young people to contribute more to their nation’s development. His role was to work with them and their families helping them to uplift themselves, especially the poor and destitute.

According to the current leader of the Antioch Baptist, Pastor Lincoln Connor, (nephew of Dr. Connor), his uncle had a special passion for children and that is why he invested so much in the people. Pastor Lincoln Connor said Dr. Connor loved his work and his country and the nation today is so much better for the work of Pastor Connor, the elder.

He is also said to have transformed the landscape of the Christian community and as such he sold his vision, not only nationally, but also to other believers in the United States and other places.

A special church service was held on Monday 4th March, running into the early hours of Tuesday 5th March, to usher in the special anniversary day. Pastor Lincoln Connor also joined the staff of ZIZ Radio for a live radio programme to highlight some of the accomplishments of the church and also to provide the opportunity for members of the public to offer testimonials on just how the church helped in their development.