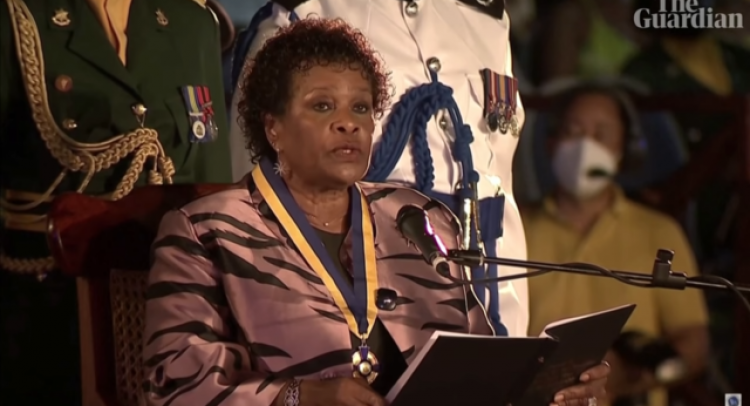 Basseterre, Tuesday, 30th November 2021, (MyVue News.com)-The people and Government of Barbados in the early hours of this morning, (Tuesday, 30th November, 2021), completed the final constitutional separation from the British, with the installation of their own President to replace the Queen of England, who served as their Head of State since 1966 when the island gained independence.

In a lavish ceremony that was filled with cultural presentations, military displays and fireworks, the country’s first President, Dame Sandra Mason, declared in a message to her people, “Possessing a clear sense of who we are and what we are capable of achieving in the year 2021, we now turn our vessels bow towards the new republic.

In the presence of the heir to the British Crown, Prince Charles, Prime Minister Mia Mottley and visiting dignitaries, and all who gathered for the ceremony, President Mason assured Barbadians and the world that “We do this, so that we may seize the full substance of our sovereignty.”

Barbados becomes only the third Caribbean nation, (behind Dominica,1978 and Trinidad, 1976), to cut ties with their colonial past to become a Republic, and not remain as a Monarchy where the Head of State resides in London, England. Guyana also left the fold of the British in 1970 when they established their republic.

In new oaths to be taken by members of Cabinet and Parliament, the elected officials of the country will swear new allegiances to the Republic of Barbados and not Queen Elizabeth II.

In his address, Prince Charles acknowledged some of the wrong that his country has done to Barbados during the period of colonialism and when countless Africans were captured and enslaved in the sugar plantations of the country.

“From the darkest days of our past and the appalling atrocity of slavery, which forever stains our history, the people of this island, forge their path with extraordinary fortitude,” said the British Prince.

With this step taken by Barbados, the debate will likely continue in other Caribbean countries that are also considering their own transition to republicanism and away from monarchial rule.