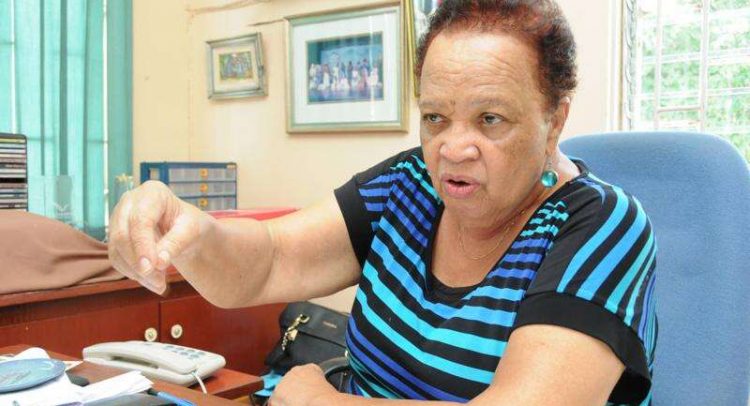 Mention the name Barbara Gloudon and, in addition to her other exploits as journalist and radio talk show host, playwright and especially the National Pantomime are almost certain to come to mind.

Gloudon, who passed away last Wednesday, has ostensibly written herself into the history of the annual dramatic production known as the National Pantomime by either writing or co-writing over 50 per cent of the production in its 80-year history.

Her first writing credits for the Little Theatre Movement, producers of the annual pantomime, came in 1969 when she created that year’s production Moonshine Anancy. This pantomime told the story of five Jamaicans vying for three lottery slots to win a trip to the moon on the country’s third spaceship.

Moonshine Anancy was directed by Eddy Thomas, co-founder of the National Dance Theatre Company of Jamaica (NDTC). He was also responsible for choreography and costume design. Music was by Joe Williams. The cast was headed by the venerable acting duo of Louise Bennett-Coverley and Ranny Williams (Miss Lou and Maas Ran), and included Lois Kelly-Barrow, Faith D’Aguilar, Eric Coverley, Fitz Weir and Weston Haughton. The chorus of singers included Ruth Ho Shing and Tony Patel.

This foray into the world of the National Pantomime opened the floodgates from Gloudon’s pen, and what flowed was a string of memorable characters, scenarios, lyrics and music for the next half-century.

Local dramaturge Dr Brian Heap has the distinction of having both acted in, as well as directed pantomimes written by Gloudon. As an actor he appeared in Pirate Princess. As a director he has helmed a total of 15 productions, including some written by Gloudon.

For Heap, Gloudon took the National Pantomime into the modern era. The annual event was first staged in 1941. In the early years the productions were based on traditional English stories, but this changed by the 1950s.

“Henry and Greta Fowler [founders of the Little Theatre Movement] noted that the pantomime was a satirical weapon to be used against colonialism. Then we had the great work of Miss Lou and Ranny who Jamaicanised the production. So, it was no longer Cinderella but they introduced the whole Anancy cycle to the stage. During this time a number of writers were credited with writing the production. Then, Barbara Gloudon came along,” said Heap.

“She took the pantomime into the modern era and did it with such audacity. She was putting Jamaicans on the moon and mimicking Columbus’s ‘discovery’ of Jamaica — and audiences loved it,” he continued.

Heap noted that as a playwright of the National Pantomime, Gloudon’s big break came with Johnny Reggae in 1978. This production chronicled the adventures of a father willing to do anything to separate his daughter from the love of her life, an aspiring reggae singer.

“She [Gloudon] didn’t depart from the traditional template of the pantomime but she made the characters relateable to Jamaican audiences, and this created mood and appeal. There was also her facility to move away from the standard English to Jamaican dialect, [which] was one of her great qualities. Not much is made of her talents as a lyricist, but the pantomime is musical theatre and she had that great ability to know when and where a song was needed and make the transition so seamless. It also helped that she collaborated with some many great musicians and arrangers over the years, including Noel Dexter, Peter Ashbourne and Grub Cooper, who all helped to bring her lyrics to life.”

He further stated that perhaps Gloudon’s greatest gift as a playwright was her ability to write for a wide audience. This for him will be part of her legacy.

“I am not one of those people who think people are irreplaceable. It is up to every generation to show its geniuses. Her great skill was writing for audiences ranging in age from five to 95, and keeping them all entertained. At the height of her writing she was covering the whole family and had to keep them entertained — and she achieved this. Connecting the generations takes great skill. Generally speaking in theatre there are adult productions and children’s theatre, and she was writing for everybody.”

Hard-pressed to name his top Barbara Gloudon-written pantomime, Heap narrowed it down to Pirate Princess, Anancy Come Back and the original Schoolers.

“Pirate Princess was just a great story based on the female pirates Ann Bonny and Mary Read. This production was just a great collaboration. Directed by Bobby Ghisays, set by Henry Mutto, lighting by George Carter and with an incredible cast lead by Leonie Forbes. It has a run in the West End which shows the strength of the production. Anancy Come Back again showed her ability to reach a wide audience. I remember playing at the Hackney Empire theatre in the UK and our first audience was 800 schoolchildren from various backgrounds — white, Afro Caribbean and Asian — and they all loved it. Schoolers was another hit because it connected with so many as it explored the merger of two traditional high schools in Jamaica, one all-girls’ and the other all-boys’,” commented Heap.

Nurses trained at CFBC can practice anywhere in the world, says Dean Bradshaw