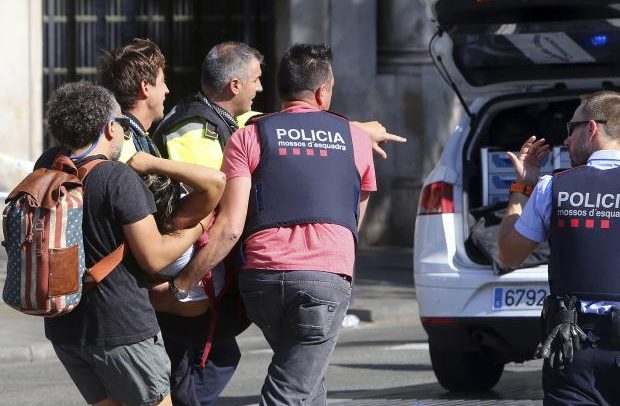 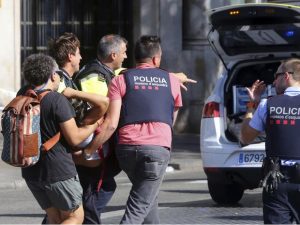 The vehicle sped along the pedestrian area that is popular with tourists, mowing down people and sending others fleeing for cover.

Two people have been arrested, but police say neither was the driver, who fled on foot.

The van had been rented in the city, officials said.

Police have confirmed that a man who drove into police officers at a checkpoint in another part of Barcelona was shot dead by officers, but there is no evidence that he was connected to the attack in Las Ramblas.

They also say one person was killed on Wednesday night in an explosion at a house outside Barcelona. They believe this incident is connected with the attack.

Police have released a photo of a man named as Driss Oubakir, whose documents were used to rent the van involved in the attack.

Local media say he is in his 20s, and was born in Morocco. However, latest reports suggest he has told police he was not involved, and that his documents were stolen.

So-called Islamic State has said it was behind the van attack in Las Ramblas, saying in a brief statement carried by its Amaq news agency that it was carried out by “Islamic State soldiers”.

The group gave no further evidence or details to back this claim.

The attack happened at the height of the season in one of Europe’s top tourist destinations.

Witnesses said the van deliberately targeted people, weaving from side to side as it drove down the boulevard.

Vehicles have been used to ram into crowds in a series of attacks across Europe since July last year.

A businessman from New Orleans, who was just arriving in a taxi in Las Ramblas, said: “I heard a crowd screaming. It sounded like they were screaming for a movie star.

“I saw the van. It had already been busted on the front. It was weaving left and right, trying to hit people as fast as possible. There were people lying on the ground.”

Aamer Anwar said he was walking down Las Ramblas, which was “jam-packed” with tourists.

“All of a sudden, I just sort of heard a crashing noise and the whole street just started to run, screaming. I saw a woman right next to me screaming for her kids,” he told Sky News.

“Police were very, very quickly there, police officers with guns, batons, everywhere. Then the whole street started getting pushed back.

“Police officers who got there just started screaming at people to move back, move back.”

Kevin Kwast, who is on holiday in Barcelona with his family, said: “I was eating with my family in La Boqueria market very near where the crash occurred.

“Hundreds of people started stampeding through the market… we started running with them going outside right into where casualties were already on the ground.

“Police pushed us into a money transfer shop and we’ve been sheltering there for over an hour.”

How have leaders reacted?

“Terrorists are defeated by unity,” he said.

Barcelona’s mayor, Ada Colau, said the city would hold a minute of silence on Friday at midday.

The United States has offered its assistance to Spain.

Secretary of State Rex Tillerson also said consular assistance was being provided to Americans in the city, and urged US nationals to check in with their families.

“Terrorists around the world should know the United States and our allies are resolved to find you and bring you to justice,” he told reporters.

UK Prime Minister Theresa May said her thoughts were with the victims, adding that “the UK stands with Spain against terror”.

‘Principia Non Homines’ Has Not Expired

Would be robbers shoot at Police