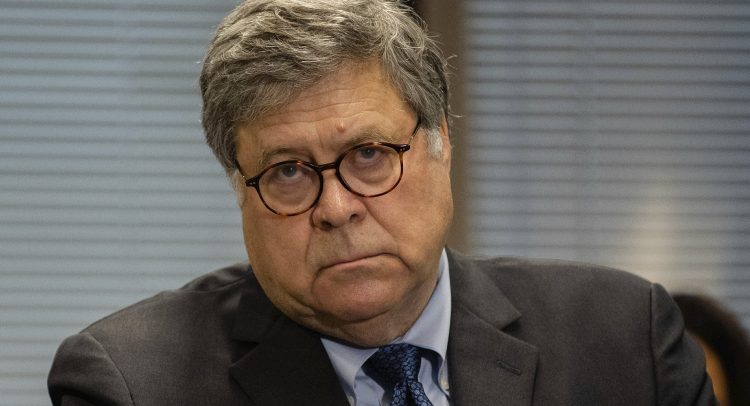 Barr under fire over comparison of virus lock-in to slavery

In remarks Wednesday night at an event hosted by Hillsdale College, Barr had called the lockdown orders the “greatest intrusion on civil liberties in American history” since slavery.

His comments, at a Northern Virginia event hosted by the school, also criticized his own prosecutors for behaving as “headhunters” in their pursuit of prominent targets and for using the weight of the criminal justice system to launch what he said were “ill-conceived” political probes.

“Did you ever, ever think, any of you,” Biden said, that the attorney general would say “that following the recommendations of the scientific community to save your and other peoples’ lives is equivalent to slavery, people being put in chains.”

He added: “I never, ever, ever thought I would see such a thoroughly, totally irresponsible administration.”

Rep. James Clyburn, D-S.C., the No. 3 House Democratic leader, told CNN that Barr’s remarks were “the most ridiculous, tone-deaf, God-awful things I’ve ever heard” because they wrongly equated human bondage with a measure aimed at saving lives.

“Slavery was not about saving lives. It was about devaluing lives,” Clyburn said. “This pandemic is a threat to human life.”

It’s not the first time Barr has condemned stay-at-home orders.

He has previously said that some orders were “ disturbingly close to house arrest,” and the Justice Department sent letters to several states warning that some of their virus-related restrictions might be unlawful. Prosecutors also filed statements of interest in several civil cases challenging some of the restrictions.

Barr has faced scrutiny for overruling the decisions of Justice Department prosecutors who work for him, including in criminal cases involving associates of President Donald Trump. But in his remarks, he rejected the notion that prosecutors should have final say in cases that they bring. Instead, Barr described them as part of the “permanent bureaucracy” and suggested they need to be supervised, and even reined in, by politically appointed leaders accountable to the president and Congress.

“The men and women who have ultimate authority in the Justice Department are thus the ones on whom our elected officials have conferred that responsibility — by presidential appointment and Senate confirmation,” Barr said. “That blessing by the two political branches of government gives these officials democratic legitimacy that career officials simply do not possess.”

Barr himself has been aggressive as attorney general in pursuing certain categories of prosecutions, including using federal statutes to charge defendants in the unrest that roiled cities after the death of George Floyd. But he warned that prosecutors can become overly attached to their cases in ways that lose perspective and judgment, listing a series of prosecutions — including under previous administrations — in which he said he believed the government had taken extreme positions.

“Individual prosecutors can sometimes become headhunters, consumed with taking down their target,” Barr said. “Subjecting their decisions to review by detached supervisors ensures the involvement of dispassionate decision-makers in the process.”

Barr’s comments appeared to be a thinly veiled reference to the fracas that arose ahead of the February sentencing of Trump confidant Roger Stone. In that case, Barr overruled the sentencing recommendation of the line prosecutors in favor of a lighter punishment. The move prompted the entire trial team to quit before Stone’s sentencing hearing. Barr has defended his intervention as in the interests of justice.

In May, he sought the dismissal of the criminal case against former Trump administration national security adviser Michael Flynn, who pleaded guilty as part of special counsel Robert Mueller’s Russia investigation to lying to the FBI. Barr’s request is tied up in a court fight.

Also Thursday, a spokeswoman for Barr said the Justice Department had explored charging Portland officials in the civil unrest there. They researched whether they could levy criminal or civil charges against the officials — exploring whether their rhetoric and actions may have helped spur the violence in Portland. The move underscored the larger Trump administration’s effort to spotlight and crack down on protest-related violence. The majority of the mass police reform demonstrations nationwide have been peaceful.

Main photo: Attorney General William Barr speaks during a press conference about Operation Legend at the Dirksen Federal Building Wednesday, Sept. 9, 2020, in Chicago. Barr said the operation was “critical in cutting Chicago’s murder rate roughly in half since before the operation.” (Pat Nabong/Chicago Sun-Times via AP)