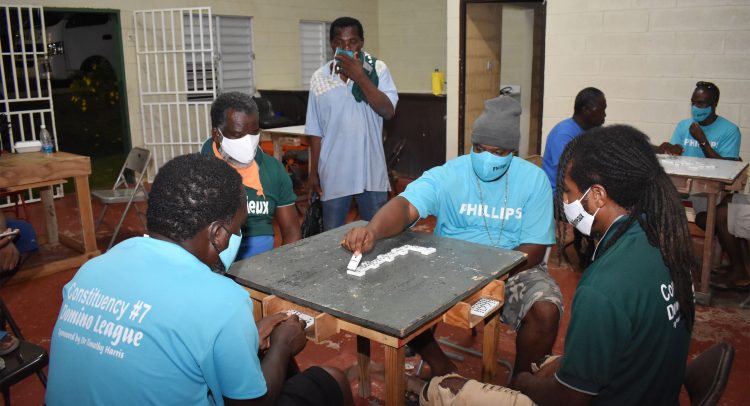 With only two segments of play left before the second and final round of the 25th edition of Constituency Number Seven Dr the Hon Timothy Harris Domino League concludes, dramatic results were recorded on Thursday September 24 as teams clamoured for the final four positions.

Defending champions Parsons Domino Club, who have a slim chance – if any – for the last four slots, muddied the waters for frontrunners and former champions Unity Domino Club when they beat them 13-11 in a game played at Cuban Bar in Lodge Project.

The loss by Unity was a much welcome gain by Phillips Domino Club whose beating of Molineux Domino Club 13-4 in their encounter at the Edgar Gilbert Sporting Complex pavilion in Molineux solidified their second position on points table. With two games left they have an outside chance of finishing at the top of the points table, since Unity who are at the top now have only one game to play.

Unstoppable Domino Club, who also have a slim chance of reaching the last four, after trailing 5-12 came from behind and upstaged former champions Lodge Domino Club through a narrow 13-12 win in their game played at the Lodge Community Centre in Lodge Project.

The other top contenders for the final four slots, Tabernacle Domino Club, eased their way through by narrowly beating Small Corner Bar Domino Club 14-11 in their game played on the grounds of Tabernacle Police Station. In a second game at the same venue, Sylvers Domino Club squeezed a narrow 13-12 win over Christchurch Domino Club.

Mansion Domino Club effectively took care of Giants Domino Club with a 13-3 beating at the Lodge Community Centre, while Guinness Domino Club collected maximum points after their intended opponents Saddlers Domino Club failed to show up for their encounter at the Edgar Gilbert Sporting Complex pavilion in Molineux.

*Unity, *Tabernacle, *Molineux, and *Guinness have played one game more than the other teams whose games would have been affected by a power outage experienced in most parts of the island on Thursday September 17.

Games continue on Sunday September 27 with the twelfth segment of play in the second round of the 25th edition of Constituency Number Seven Dr the Hon Timothy Harris Domino League and will be taking place at the usual three venues. All games start at 4:00 pm.

At the Lodge Community Centre in Lodge Project, Lodge will come up against Giants, Small Corner Bar will face Mansion, and Unity will square it off with Sylvers. Two games, Saddlers vs. Phillips and Christchurch vs. Molineux, will be held on the grounds of the Tabernacle Police Station; while the Edgar Gilbert Sporting Complex pavilion in Molineux will host Tabernacle vs. Unstoppable and Guinness vs. Parsons games.