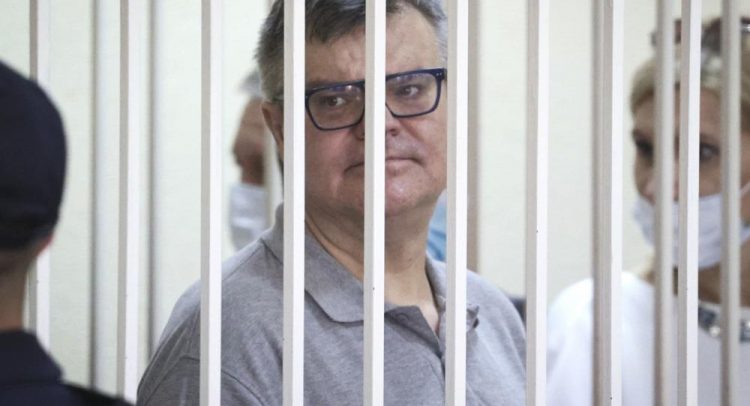 KYIV, Ukraine (AP) — The highest court in Belarus convicted an aspiring rival to the nation’s authoritarian president on corruption charges that he rejects as politically motivated and sentenced him Tuesday to 14 years in prison.

Viktor Babariko, the head of a commercial bank owned by Russian natural gas company Gazprom, had hoped to challenge President Alexander Lukashenko last year, but he was arrested before the country’s August 2020 presidential election and prohibited from registering as a candidate.

At the time, he was widely perceived as Lukashenko’s main rival, and his arrest drew thousands of protesters to the streets.

On Tuesday, Belarus’ Supreme Court convicted Babariko on charges of taking a bribe and money laundering and handed him a 14-year prison sentence and a fine of about $57,000.

Babariko, who served as the chief executive of Belgazprombank, has remained jailed since his arrest. He dismissed the corruption charges against him as politically driven.

“I can’t plead guilty to the crimes I didn’t commit,” Babariko told the court before it issued the verdict. “I can tell you from that cage that I don’t feel ashamed for my life before the people I knew.”

The U.S. Embassy denounced the verdict as a “cruel sham,” saying on Twitter it showed that Lukashenko’s “regime will stop at nothing to keep power.”

Lukashenko’s reelection to a sixth term was widely seen as rigged and triggered months of protests, the largest of which drew up to 200,000 people. Authorities responded to the demonstrations with a massive crackdown that saw more than 35,000 people arrested, thousands beaten by police and opposition leaders jailed or forced to leave the country.

The European Union and the United States have responded to the crackdown by slapping Belarus with sanctions. They have imposed new, tougher restrictions after Belarus diverted a passenger jet on May 23 to arrest an opposition journalist.

Speaking in Brussels on Tuesday, European Commission spokesman Peter Stano said that Babariko’s “sentence is one of at least 125 unfair and arbitrary recent verdicts by Belarusian courts in politically motivated trials, often held behind closed doors and without due process of law.”

Stano said that “serious human rights violations come at a price,” and that “the EU stands ready to consider further measures” beyond the series of sanctions it has already imposed on top Belarus officials and businesses.

He said the EU demands that Babariko be immediately released, along with “all political prisoners, detained journalists and people who are behind bars for exercising their fundamental rights.” “The regime must halt repression and injustice and hold perpetrators to account,” he added.

Sviatlana Tsikhanouskaya, who ended up as the main opposition candidate, denounced what she described as a “mad sentence to the person who decided to enter politics and became one of the leaders who woke the country up from a long sleep.”

“The regime is doing all that in order to kill any thoughts even distantly resembling faith and hope,” said Tsikhanouskaya, who was forced to leave Belarus under official pressure after the election. “But the hope in our hearts is something that is the most precious for Viktor and thousands of other innocent people in prisons.”

Viktor Babariko, the former head of Russia-owned Belgazprombank, stands inside a cage in a court room in Minsk, Belarus, Tuesday, July 6, 2021. The Supreme Court in Belarus has sentenced a former contender in the 2020 presidential race to 14 years in prison on corruption charges in a case that has been widely seen as politically motivated. Viktor Babariko, the former chief executive of a Russia-owned bank, aspired to challenge Belarus’ authoritarian president Alexander Lukashenko in last year’s election. (Ramil Nasibulin/BelTA Pool Photo via AP)