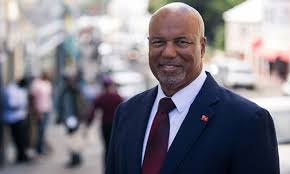 Bermuda’s controversial contract to build a new airport terminal has won an international “deal of the year” award.

The public-private partnership (PPP) contract was awarded 2017 North American Deal of the Year at a ceremony in New York organised by London-based IJGlobal Magazine, a top specialist publication in project finance and construction.

Bob Richards who was finance minister when the One Bermuda Alliance was in power and spearheaded the project amid public protests, said the news had “put a smile on my face”.

“I hope Bermudians now understand the difference between facts and political spin. It was so controversial here and I’m glad it’s got the recognition it deserves,” said Richards, who lost his Devonshire East seat in the general election that was won by the Progressive Labour Party (PLP) last year.

The airport deal will also now appear in the spring edition of the magazine alongside other winners.

Richards said he did not know the deal, originally struck in late 2014 with the Canadian Commercial Corporation and developers Aecon, was even in the running until a friend in New York called him to tell him the airport deal had won.

“I’m extremely pleased. I’m very proud and it’s an indication of the good work we did. It’s not just vindication — it’s really good, it’s an international award, away from Bermuda and Bermuda politics.”

“It’s a confirmation of the good work we did and proof of what we’ve been saying all along,” he said.

The deal was opposed by the PLP when it was in opposition and sparked public protests.
A report by overseas consultant LeighFisher released last month said cancellation of the deal only months into the start would have cost more than US$100 million.

It added that the island’s struggling economy would have suffered even more damage if the government had pulled out of the contract, with job losses, “economic damage and instability, international reputational risk, threat of credit rating downgrades and negative impact on tourism”.

The report found that the terms and conditions of the contract were “broadly consistent” with similar public-private deals and the interest rate for long-term debt and the return on equity for Aecon were “within market range”.

But the LeighFisher report said the project was not competitively tendered, which could increase negotiating leverage, maintain competition and lead to best value for money.
Richards said at the time that a competitive tender would not have worked for such a small project because Bermuda could not have compensated unsuccessful competitors for the work they put into a detailed bid.

Premier David Burt announced the contract would not be cancelled because it would be “fiscally irresponsible” and cost at least $196 million.

The report identified about $15 million in “enhancements” that could be negotiated and Burt said he would work to get “the best possible outcomes from this situation”.

An independent blue ribbon panel set up by the OBA last year to examine the deal found it was “commercially sound and reasonable and likely to meet the government’s stated objectives of long-term sustainability and increased traffic volume and revenue”.

A protest against the project in December 2016 turned violent when police officers clashed with demonstrators who blocked entry to the House of Assembly.