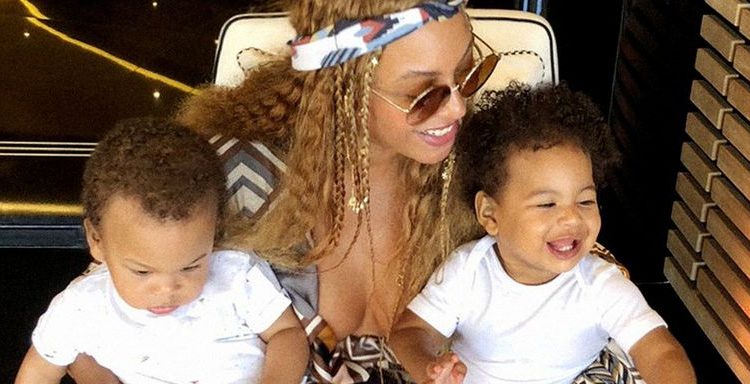 Dramatic pregnancy announcement aside, Beyoncé and Jay-Z are pretty protective of their 13-month-old twins, Sir and Rumi Carter. So protective, in fact, that they even hired baby models to pose as their children in concert visuals for their “On The Run II” tour.

But sometimes they throw fans a bone, and that “sometimes” is now. To mark the end of the European leg of the tour, Beyonce.com has treated the world to exclusive concert images and family photos featuring Blue Ivy and her younger siblings

In one shot, Beyoncé can be seen sitting with a baby perched on each leg. Sir, wearing orange swim shorts, looks pensive, while onesie-clad Rumi is caught in a moment of pure joy.

Rumi also resurfaces in a second pic, which shows her holding her dad’s hand as they take in the views from the luxury yacht the family chartered for their recent vacation. A moment of appreciation for those ruffled yellow bloomers, please! But no Carter figures more prominently than 6-year-old Blue Ivy, who can be seen meditating both solo and with her mama, stacking on some sunglasses, and just generally winning summer.

The full album — including cameos from grandma Tina Knowles Lawson and a shot of Beyoncé drinking wine in a hot tub that should shut down those incessant pregnancy rumors once and for all — can be found at Beyonce.com.