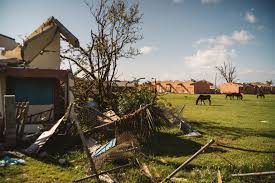 Beyond hurricanes: How do we finance resilience in the Caribbean?

As a new hurricane season approaches in the Caribbean, I attended last week’s dialogue focused on “Financing Resilience in SIDS” held in Antigua and Barbuda and sponsored by the host government and Belgium.

The gathering sought to identify the main risks facing Small Island Developing States (SIDS), especially in terms of financing and innovative solutions to the countries’ challenges.

These vastly different SIDS have much in common. There was a clear recognition that the splendor of their beauty, wealth of their culture and vibrancy of their people mask a deep vulnerability to both natural disasters and economic shocks, which are further exacerbated by climate change.

This is true for Caribbean countries and beyond. In addition to the Caribbean, participants at the event last week also included representatives from Africa, Indian Ocean and the Pacific, from their Permanent Missions to the UN.

The hurricanes of last September 2017 that devastated our host, Antigua and Barbuda, and other Caribbean countries provided a compelling testimonial to this “new normal”. Dominica lost 226 percent of its GDP and a generation of development gains in a matter of hours with the passage of Hurricane Maria.

In our host country, the island of Barbuda endured a similar fate just 10 days earlier after Hurricane Irma left a path of destruction. The story is very much the same in other SIDS, such as Vanuatu and Fiji, which suffered massive losses from Cyclones Pam and Winston in 2015 and 2016 respectively.

Notwithstanding the compelling narrative of adverse weather events, there are also other challenges, which hamper the ability to build resilient Small Island Developing States. As a UNDP presenter, I emphasized that resilience in the context of SIDS should be holistic and not exclusively associated with hurricanes and natural disasters.

The outcome document, “The St John’s Call for Action” clearly recognized that building resilience in the Caribbean is about managing the risks associated with natural disasters, but this entails much more than hurricanes, as our Human Development Report for the Caribbean also stressed.

One big challenge is accessing finance. SIDS are largely classified as middle or high-income countries with limited access to concessional financing and Overseas Development Assistance (ODA).

This is compounded by high levels of debt in places such as the Caribbean, which is one of the world’s most highly indebted regions. Indeed, its debt burden stands at an estimated $52 billion with a debt to GDP ratio of more than 70 percent. In some countries, debt levels are more than 100 percent of GDP.

At the same time, due to the small geographical and population size, SIDS invariably have a narrow tax base, limiting the ability to mobilize resources domestically. Mindful of these constraints, the St John’s Call to Action made some specific recommendations.

The role and importance of innovation was placed at the forefront on the way forward. Peter Thomson, the UN’s Special Envoy for Oceans made a compelling case for the blue economy—or boosting sustainable use of the ocean’s resources for gains in the social, economic and environmental realms—as a viable policy option.

The example of Seychelles and the launch of the World’s first Blue Bond was cited. Such Blue Bonds will help mobilize public and private resource to advance the Blue Economy, including through sustainable fisheries.

It was also noted that UNDP has started preparatory work to help Grenada launch a Blue Bond as well, which will be the first in the Caribbean. The outcome statement was clear on the importance of focusing on the green economy and transition to renewables.

Recognizing that innovation is required in financing, a call was made to rethink the role the diaspora plays in building resilience and providing the financial resources. In the Caribbean, remittances exceed foreign direct investment and ODA combined.

I made the point that the region needs to facilitate approaches that orient remittances toward investment instead of almost exclusively on consumption. Based on the experience of SIDS and the huge costs of recovery post disasters, the importance of new insurance products to help manage the risks faced by SIDS is a key issue.

The ”St John’s Call for Action”spoke to the need for sustained global advocacy for the recognition of SIDS’ vulnerability as a criterion to access concessional financing. At the same time, there must be a clear recognition that to attract the financing to build resilience and reach the SDGs, private capital is essential.

Attracting it is hard work; and creating an enabling environment is a necessary first step. Caribbean SIDS must work hard to improve the ease of doing business and lower energy costs, which represent major obstacles to attracting foreign direct investment. SIDS representatives also agreed on the importance not only of getting additional financing but also on the value of intensifying collaboration between and among the countries. UNDP with its global expertise and access has key role to play.

Therefore, teaming up, building partnerships and sharing innovative experiences, including through the UNDP-backed Aruba Centre of Excellence Sustainable Development of SIDS is a crucial and urgent step. There is no magic pill or easy solution.

The “St John’s Call for Action” by its very nature emphasized that the time to talk is over; the time to act is now. UNDP will continue to be a strong partner of SIDS, together, in the same boat.

EU could give member states $7,000 for every rescued migrant