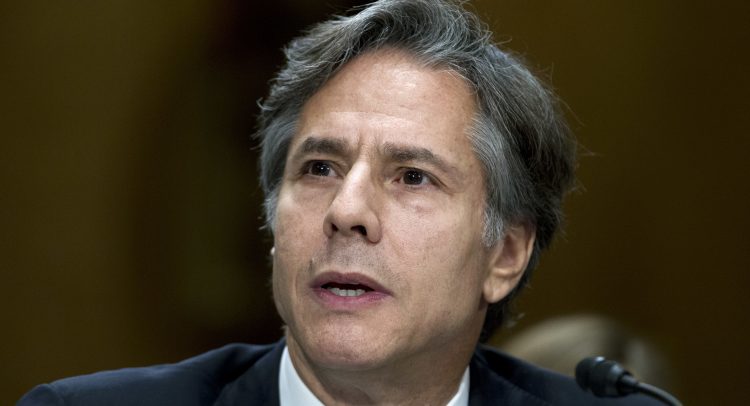 Biden to nominate Antony Blinken as US secretary of state

US President-elect Joe Biden is expected to nominate veteran diplomat Antony Blinken as his secretary of state, according to media reports.

Bloomberg, The New York Times and several other news organisations reported on the plan to nominate Blinken on Monday, quoting anonymous sources close to the president-elect.

Blinken, 58, served as the deputy secretary of state and as deputy national security adviser in President Barack Obama’s administration, in which Biden served as vice president.

The New York Times called Blinken a “defender of global alliances” and said he is expected to try and coalesce sceptical international partners into new competition with China if nominated and confirmed to the role.

An announcement on Blinken’s nomination is likely on Tuesday, Reuters news agency reported.

Biden is also expected to nominate another close aide, Jake Sullivan, as national security adviser, according to US media, while Linda Thomas-Greenfield, a 35-year veteran of the foreign service, is expected to be named Washington’s ambassador to the United Nations.

Blinken, a graduate of Harvard University and Columbia Law School and a longtime Democratic foreign policy presence, has long touted the view that Washington needs to take an active leadership role in the world or see that role filled by countries like China with contrary interests.

Chief among his priorities, according to the New York Times, will be to re-establish the US as a trusted ally that is ready to rejoin the global agreements and institutions that President Donald Trump jettisoned, including the Paris climate accord, the Iran nuclear deal and the World Health Organization.

“Simply put, the big problems that we face as a country and as a planet, whether it’s climate change, whether it’s a pandemic, whether it’s the spread of bad weapons – to state the obvious, none of these have unilateral solutions,” Blinken said at a forum at the Hudson Institute in July. “Even a country as powerful as the United States can’t handle them alone.”

He added that Washington also needed to work with other countries to deal with the challenges posed by China, a country he described as a competitor to the US. Still, a Biden administration, he said, would engage and work with China in areas of overlapping interests, such as tackling climate change and global pandemics.

Blinken has also called for a change in the US approach to Iran.

He was closely involved in the Obama administration’s sealing of a landmark 2015 nuclear accord with Tehran and has strongly criticised Trump’s withdrawal from the pact, noting that Iran has since boosted its nuclear programme and stepped up its support for regional proxies, even as its economy takes a hit from US sanctions.

Along with other Biden aides, Blinken has said that Washington should be willing to return to the Iran deal but at the same time seek a stronger and longer-lasting agreement.

Richard Haass, president of the Council on Foreign Relations, wrote on Twitter that Blinken would be a strong secretary of state.

Besides thorough knowledge of foreign policy, Blinken has “a relationship with his boss that allows him to speak truth to power and the authority to speak for his boss,” Haass wrote.

Ron Klain, Biden’s incoming chief of staff, said on Sunday that the Trump administration’s refusal to clear the way for Biden’s team to have access to key information about agencies and federal dollars for the transition was taking its toll on planning, including the Cabinet selection process.

Trump’s General Services Administration has yet to acknowledge that Biden won the election – a determination that would remove those roadblocks.

“We’re not in a position to get background checks on Cabinet nominees. And so there are definite impacts. Those impacts escalate every day,” Klain told ABC’s “This Week.”