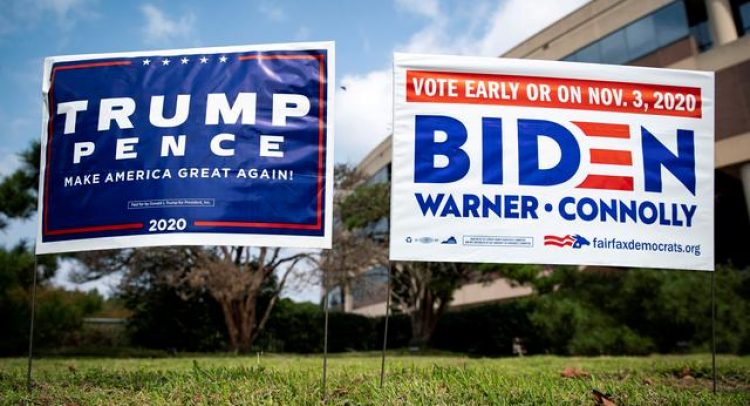 Donald Trump and his rival for the White House, Joe Biden, were campaigning on Monday in two U.S. battleground states that could decide the November election as they sparred over the president’s plan to fill a vacant Supreme Court seat.

A Republican seeking re-election on Nov. 3, Trump will hold campaign events in Ohio, a state some Democrats once saw as a lock for Trump, while Biden, the Democratic former vice president, makes his second trip of the month to Wisconsin.

Each is reckoning with a presidential contest that was upended by Friday’s death of the liberal Justice Ruth Bader Ginsburg.

Trump’s intention to appoint a replacement before the election, which would cement a 6-3 conservative majority, has angered Democrats and shifted the campaign’s focus away from the coronavirus pandemic that has killed nearly 200,000 Americans and thrown millions out of work.

Biden on Sunday said the winner of the election should pick the person who fills Ginsburg’s seat. He called Trump’s planned appointment an “exercise of raw political power” after Republican senators refused to consider Democratic President Barack Obama’s nominee in 2016, citing that year’s presidential election.

In a Fox News interview on Monday, Trump said he will name his choice to replace Ginsburg by Friday or Saturday, after mourners pay their respects.

Ginsburg’s body will lay in repose at the court on Wednesday and Thursday before she lies in state at the U.S. Capitol on Friday.

Ohio and Wisconsin are hotly contested because their population can swing either to Republicans or Democrats and play a decisive role in presidential elections.

In his last visit to Wisconsin, Biden went to Kenosha and spoke with Jacob Blake, the Black man whose shooting by police prompted widespread unrest.

This time, Biden will visit largely white Manitowoc County, which supported the former vice president and President Barack Obama when they ran on the Democratic ticket in 2008. The county backed Trump in 2016, helping deliver the state to a Republican presidential candidate for the first time since 1984.

Trump’s campaign has also prioritized the state after winning it in 2016 by less than 1% of the vote. Trump visited Wisconsin last week, announcing a new round of coronavirus pandemic assistance to farmers of about $13 billion.

Biden has built a formidable financial advantage for the campaign’s final stretch after a massive fundraising haul in August. The campaign and its party allies will report having $466 million in cash at the end of August, while Trump’s war chest stood at $325 million, according to officials from both sides.

Early voting, both in-person and by mail, has already begun in a handful of states.

The use of absentee ballots is expected to skyrocket this fall amid the pandemic. Trump has repeatedly asserted without evidence that voting by mail is subject to fraud, while Democrats raised alarm when Postmaster General Louis DeJoy, a Trump ally, implemented cost-cutting measures amid delivery delays. DeJoy has since said he will pause some of the changes.

A federal judge in New York on Monday ordered the U.S. Postal Service to expedite all mail ballots and ensure that postal workers are able to work overtime to ensure votes are processed. Last week, another judge issued an injunction freezing operational changes DeJoy had made.

In Ohio, Trump is expected to speak about “fighting for the American worker,” with a focus on the economic themes that dominated his re-election pitch prior to Ginsburg’s death, before attending a rally.

Earlier in the race, many Democrats had privately written Ohio off, seeing it as firmly in Trump’s grasp. But polls show a tight contest, and Biden’s campaign is now pursuing wins in an expanded set of states.

On Monday, Biden’s campaign said it would add Georgia and Iowa to a list of 10 other states where it is running paid advertisements. Meanwhile, campaign finance filings on Sunday showed the national Republican Party transferred $1.3 million in August to the coffers of the state party in Texas, a longtime Republican stronghold that Democrats also hope to make competitive.

Iran urges defiance of sanctions as US threatens 'consequences'