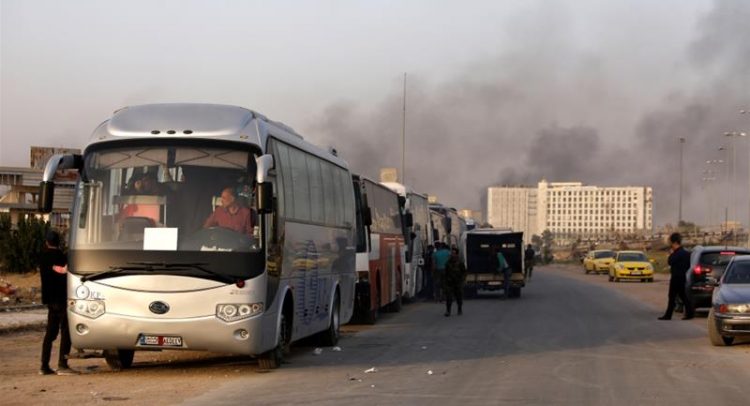 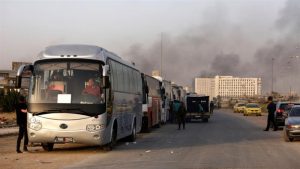 At least 6,750 people have been evacuated from towns in Syria’s Eastern Ghouta, marking the largest evacuation to date, according to state media.

A convoy of 100 buses departed on Tuesday morning from the Irbin corridor towards rebel-held Idlib province in the north, state news agency Sana reported.

A third rebel group in Eastern Ghouta’s Douma, the enclave’s biggest town, home to about 140,000 people, has refused to surrender and is still engaged in negotiations.

According to activists, a deal between the Jaish al-Islam rebel group and the Russians will most likely be announced at the end of the week.

Eastern Ghouta has been under rebel control since mid-2013. That year, Assad’s government imposed a tight siege on the Damascus suburb, which was home to about 400,000 people.

For six weeks since February 18, Syrian government forces, backed by Russian fighter jets, tightened their siege on the city with heavy bombardments and shelling that killed about 1,500 people and wounded more than 5,000.

“Negotiations are ongoing and we expect to hear in three days whether a deal is reached,” he told Al Jazeera.

“We do not expect fast results. We all need to be patient,” the council said in a statement.

The first round of negotiations between the Douma-based rebels and the Russians included talks on improving shelters for displaced civilians, the statement added.

The talks also included ceasefire extension to last throughout the entire negotiation period, and to allow aid trucks in.

The second round of talks will kick off on Wednesday, activists told Al Jazeera.

It is still unknown what the agenda of the second round will entail.

Residents of the enclave have been in dire need of food and medicine, especially since the latest offensive began, which has exacerbated Eastern Ghouta’s humanitarian crisis.

Though some aid has previously been allowed in, a 46-lorry aid convoy only included supplies for 27,000 people. Other convoys have not been able to enter due to the government’s bombardment campaign that had been ongoing for more than a month.

LIAT implements new security measures for passengers to US and territories

Russia-Skripal scandal: What we know so far