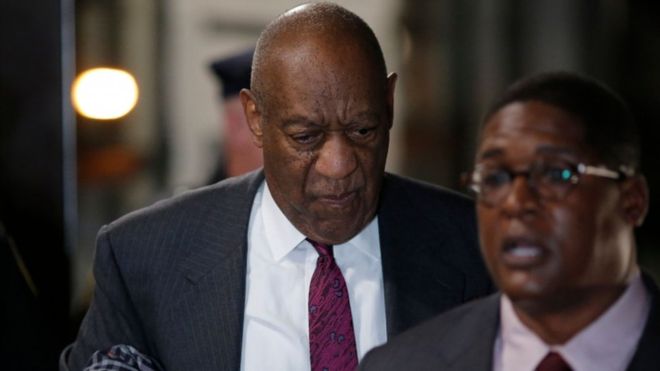 US comedian Bill Cosby has been found guilty of three counts of sexual assault, each of which carries a potential 10 years in prison.

The actor has been on trial for drugging and assaulting ex-basketball player Andrea Constand in 2004.

Cosby, 80, will remain out of jail until he is sentenced, the judge ruled.

It was the second time the actor had stood trial for the allegations, after an earlier jury failed to reach a verdict in June 2017.

At the start of the retrial in Pennsylvania it was revealed that Cosby had paid Ms Constand almost $3.4m (£2.4m) in a civil settlement in 2006.

Cosby is best known for starring in the 1980s TV series The Cosby Show.

Around 60 women over five decades have publicly accused the Emmy award-winning actor of being a sexual predator. But statute of limitation laws mean that only one charge has been brought to trial.

The case was one of the first celebrity assault trials conducted in the light of the #MeToo movement, which has raised awareness of alleged sexual misconduct by a number of powerful media figures.

Students Vie to Be New Junior Minister of Tourism