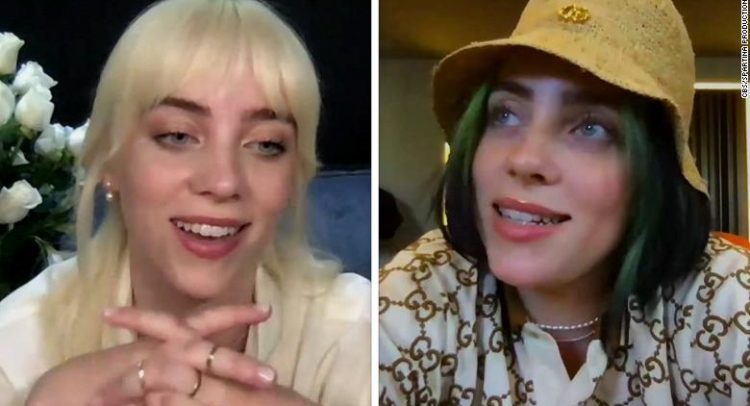 Billie Eilish is talking about the reaction to that Vogue cover

(CNN) – Billie Eilish appeared on “The Late Show With Stephen Colbert” on Monday night, where she talked about her changing hair styles, performed her new single and discussed her recent British Vogue cover.

Colbert wanted to get to the bottom of if Eilish is often wearing a wig nor not, asking if her former jet black and neon green hair was real or not.

“I was just as blond then as I am now,” Eilish said, admitting the look was a Billie Eilish Halloween costume, wig included, that she bought on Amazon. “It was awful, it was the ugliest thing I’ve ever seen,” she laughed.

“I looked f—ing crazy underneath, and I needed to look not-crazy,” she explained, saying she needed time to let her platinum blonde hair heal from dying it too much.

The “Bad Guy” singer also talked about her stunning Vogue shoot and the millions of “likes” she got online after posting it.

“It makes me not want to post again,” she said, adding, “I feel like I wanted to post more when less people cared, now that more people care, it’s scary to me. But it’s amazing.

“Eilish and her brother and musical collaborator, Finneas, performed her new single, “Your Power,” in a desert.

Her new album, “Happier Than Ever” has a July 30 release date.”

It’s my favorite thing that I’ve ever created,” she enthused. “I’m just so proud of it, and feel so cocky about it.”

U-Roy's farewell set for May 19