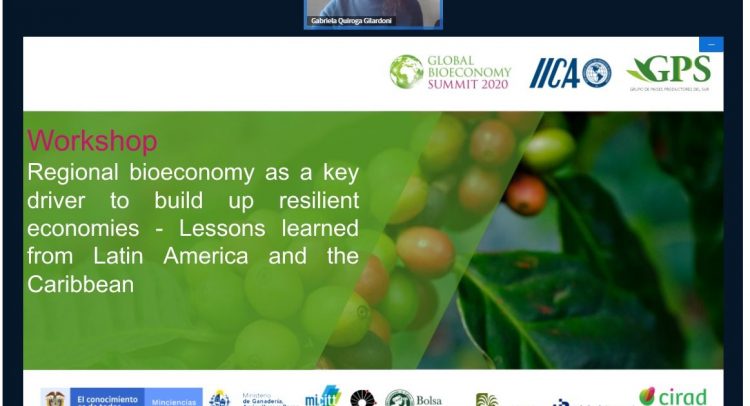 San Jose, 23 November 2020 (IICA) – During a workshop held at the Global Bioeconomy Summit 2020, the main global event on the bioeconomy, a broad overview of the bioeconomy in Latin America and the Caribbean was presented, and participants shared concrete experiences in areas such as green chemistry and biofuels in Argentina, Brazil, Colombia, Costa Rica and Uruguay, and discussed their impact on the environment, rural development and job creation.

Organized by the Inter-American Institute for Cooperation on Agriculture (IICA) and the Group of Producing Countries from the Southern Cone (GPS), the workshop was entitled “Regional bioeconomy as a key driving force to build resilient economies: lessons learned from Latin America and the Caribbean”.

Also in attendance were Ramiro Costa, of the Grains Exchange of Argentina; Marcelo Regúnaga, of GPS; Guy Henry, a delegate of CIRAD; Bernardo Silva, of Think Brazil; and Eduardo Trigo, advisor to IICA’s Bioeconomy and Production Development Program.

During the event, participants analyzed the performance of the bioeconomy in Latin America and the Caribbean, as well as the region’s potential and challenges with respect to promoting the bioeconomy as a strategy for socio-economic reactivation, food security and market insertion in the new post-Covid-19 context. They also reviewed bioeconomy policies and businesses in the region in order to identify pending tasks in this area.

According to Eduardo Trigo, several countries that have embraced the concept of the bioeconomy are now key business players in the sector and have become leading figures in businesses related to biotechnological crops, bioenergy, low-carbon agriculture and in efforts to promote biodiversity. This, in turn, has allowed for achieving substantial progress in policymaking and the development of strategies to promote this sector.

With respect to public policies, Federico Torres presented Costa Rica’s bioeconomy strategy, whose main objectives are to promote sustainable production through the equitable use of biological resources, biomass reuse and the progress of new sciences and technologies.

Carolina Balián and Arturo Luna, in turn, presented the experiences of Uruguay and Colombia, respectively, in the development of policies on the bioeconomy as a strategic approach to fostering sustainable development.

Colombia is the world’s fourth largest producer of palm oil and is taking advantage of the potential afforded by the bioeconomy to improve its competitiveness and sustainability, as well as achieve greater inclusion in rural territories, remarked Daniella Sardi.

Thanks to public-private efforts, biodiesel in Colombia has served as a driving force for value-adding in agriculture, the development of rural territories, environmental sustainability and changes in the country’s energy matrix.

Argentina, on the other hand, has had successful experiences related to sustainable intensification as a strategy based on innovation and the capitalization of good practices and lessons learned, explained Ramiro Costa.

In the case of Brazil, Gonçalo Pereira highlighted the ways in which second-generation technology in that country would facilitate more efficient and sustainable use of biomass for the production not only of food but also of many other bioproducts with added value, such as bioenergy, biochemistry and biocosmetics.

The event ended with a panel discussion moderated by Marcelo Regúnaga, during which experts Henry and Silva discussed how to overcome bottlenecks and scale up good practices and lessons learned in policymaking and business in the region.

The Global Bioeconomy Summit is the main global event on the bioeconomy. This year, it was held virtually from 16 to 20 November.

The biennial conference has become the leading event with a format to globally review and discuss emerging opportunities and challenges of the bioeconomy and develop visions for the future development of a sustainable bioeconomy among key actors from governments, science and innovation, business and civil society.

IICA was the official partner of the Global Bioeconomy Summit 2020 (see https://bit.ly/2Uqkm8f).

Main Photo: he projects were presented by IICA and the Group of Producing Countries from the Southern Cone (GPS) during a workshop held at the Global Bioeconomy Summit 2020, the main global event on the bioeconomy.