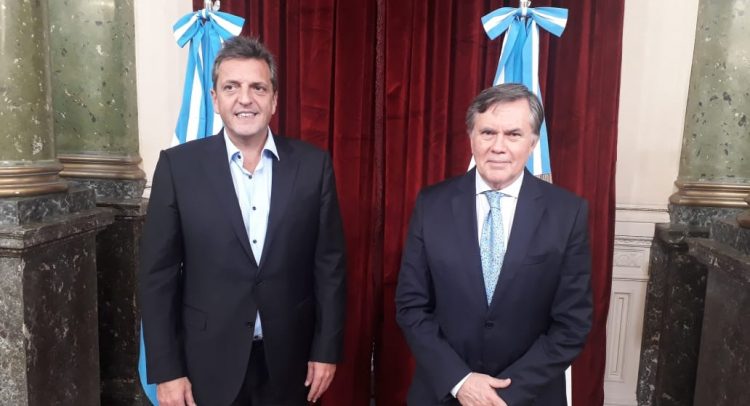 Bioeconomy, sustainability, digital connectivity, science and technology: the pillars of the agenda shared by IICA and high-level authorities of Argentina

San Jose, 14 December 2021 (IICA). High-level authorities of Argentina and of the Inter-American Institute for Cooperation on Agriculture (IICA) made progress on collaborative projects aimed at building more sustainable agrifood systems, as part of a shared agenda that includes, among other topics, the promotion of the bioeconomy, digital connectivity in rural areas, the protection of natural resources and the use of new technologies to foster agricultural development and rural well-being.

Sergio Massa, President of the Chamber of Deputies; Daniel Filmus, Minister of Science, Technology and Innovation; and Juan Cabandié, Minister of the Environment and Sustainable Development, welcomed the Director General of IICA, Manuel Otero, who visited Argentina, a global leader in agricultural production and technologies, with the goal of strengthening joint work with the country.

Otero and Massa met at the headquarters of the National Congress in Buenos Aires, where they agreed to sponsor an exchange between the Committee on Agriculture and Livestock of the Chamber of Deputies and IICA on issues related to the future of agrifood production. They discussed the interrelationship between agriculture and topics that are in high demand at the global level, such as environmental protection and nutrition.

Massa also expressed interest in the work that IICA has been carrying out to ensure that the public agenda includes efforts to bridge the digital divide that affects rural areas compared to cities.

At least 77 million rural dwellers in Latin America and the Caribbean do not have connectivity at the necessary minimum standards of quality, according to a study carried out last year by IICA together with the Inter-American Development Bank (IDB) and Microsoft. During the meeting, Massa and Otero pointed out that this reality undermines public and private efforts in the region to generate opportunities for the rural population and to encourage people to settle in the countryside.

In turn, Minister Filmus informed the IICA team of the scientific and biotechnology research work carried out in Argentina by professionals of the National Council for Scientific and Technical Research (CONICET), which is extended to rural producers through the National Institute of Agricultural Technology (INTA).

Filmus and Otero agreed to design technical cooperation programs to further develop both the bioeconomy as a model for sustainable growth, and digital agricultural services to provide rural dwellers with technical assistance and rural extension services.

With a view to reducing rural poverty and fostering social and productive inclusion, IICA has engaged in joint work with Michael Kremer, IICA Goodwill Ambassador, Professor of Economics at the University of Chicago and winner of the 2019 Nobel Prize in Economics.

The Minister of Science, Technology and Innovation of Argentina also expressed interest in IICA’s technical cooperation activities in Central America and the Caribbean, with a view to establishing collaborative projects that would enable Argentina to share its knowledge and experience in science and technology applied to agriculture with those subregions, which are highly dependent on food imports.

During his meeting with Cabandié, Otero described the efforts that IICA has been undertaking to foster greener, more inclusive agriculture in the region, and revealed that the Institute is already working together with different subregions of the continent to develop agendas in preparation for the next United Nations Climate Change Conference, COP 27, to be held in late 2022.

The Director General of IICA considered that COP 27 will provide an opportunity to showcase progress achieved with respect to the environmental sustainability of agriculture in the hemisphere. In this regard, he outlined the results that have already been achieved in several countries thanks to the “Living Soils in the Americas” program, an initiative led by IICA and the Center for Carbon Management and Sequestration (C-MASC), which is overseen by award-winning scientist Rattan Lal at Ohio State University.

Otero also informed Cabandié that the Green Climate Fund had accredited IICA to access resources to support climate adaptation and resilience initiatives in the agriculture sector and rural areas of countries of the Americas.

Cabandié underscored the strengths of the work that Argentina’s scientific and technological system has been carrying out in areas such as low-carbon agricultural production. Additionally, he described the National Forest Management Plan with Integrated Livestock (MBGI), which seeks to combat deforestation.

He also highlighted his Ministry’s agroecology projects, for which Otero offered to make available the experience of the Inter-American Commission for Organic Agriculture (ICOA), whose Technical Secretariat is held by IICA.

During his visit to Argentina, Otero also met with the Minister of Agriculture, Livestock and Fisheries, Julián Domínguez; the Chief of the Cabinet of Ministers, Juan Manzur; and the Minister of Foreign Affairs, Santiago Cafiero, who underscored the strategic role of agriculture and the value of scientific and technological advances for the economic and social development of rural areas.

During the meetings with Argentinean authorities, the Director General of IICA was joined by Jorge Werthein, Special Advisor to the Director General; Caio Rocha, IICA Representative in Argentina and Special Affairs Coordinator for the Southern Region; Gabriel Delgado, IICA Representative in Brazil; and Ignacio Hernaiz, Advisor for Institutional Relations at the IICA Delegation in Argentina.

Featured Image – The President of the Chamber of Deputies, Sergio Massa, with the Director General of IICA, Manuel Otero.