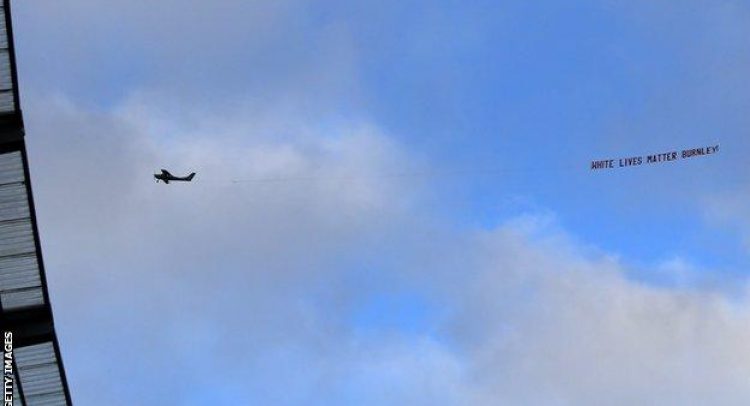 Blackpool Airport has suspended banner flights from its base after the message ‘White Lives Matter Burnley’ was towed by an aeroplane over Etihad Stadium.

Lancashire Police is also investigating the banner, which was flown over the stadium during Manchester City’s 5-0 win over Burnley on Monday.

In a statement, manager Stephen Smith said the airport and Blackpool Council are “outraged by this incident”.

Burnley say they are “ashamed and embarrassed” by the banner.

Blackpool Airport says the incident was reported to police and the Civil Aviation Authority.

The statement added: “We stand against racism of any kind and absolutely do not condone the activity, the message was offensive and the action reprehensible. The decision to fly the banner was taken entirely by the banner flying company without the knowledge or approval of the airport or Blackpool Council.

“Due to the nature of the activity, banners are not checked before take-off and the content is at the operator’s discretion.

“Following an emergency review this morning, Blackpool Airport will suspend all banner towing operations at the airport with immediate effect and we would suggest that other airports should also consider this approach in light of what has happened at Blackpool.”

Chief superintendent Russ Procter said Lancashire Police are making enquiries “to establish the full circumstances surrounding this incident” and will then be in a position to “make an assessment as to whether any criminal offences have taken place”.

He added: “We recognise that this banner will have caused offence to many people in Lancashire and beyond and we continue to liaise closely with our partners at both the club and in the local authority.”

Burnley and City players and staff had taken a knee in support of the Black Lives Matter movement moments before the aircraft circled over the stadium.

“We’re ashamed, we’re embarrassed. It’s a minority of our supporters – I know I speak for a massive part of our support who distance ourselves from anything like that.”

In a statement, Burnley said that the banner “in no way represents” what the club stands for and that they will “work fully with the authorities to identify those responsible and take appropriate action”.

Both Burnley and City were wearing shirts with the players’ names replaced with ‘Black Lives Matter’.

It is understood that the stunt was carried out by Air Ads, which operates out of Blackpool Airport and runs a one-stop shop where they make the banners and fly them. They have flown over football stadiums in the past, including a ‘Moyes Out’ one at Old Trafford.

When BBC Sport contacted the company, a man who answered refused to give his name but said he was packing away the banner.

He said as long as banners were legal and did not use coarse language, the company did not ‘take sides’ and had previously done a Black Lives Matter banner. He claimed police had been informed of the banner in advance.

The Premier League resumed on 17 June after a 100-day hiatus because of the coronavirus pandemic; players and officials have been showing their support for the movement for racial equality following the death of George Floyd in the United States last month.

Floyd, a 46-year-old unarmed black man, died as a white police officer held a knee on his neck for nearly nine minutes. His death sparked protests around the world.

Main photo: The aircraft circled above Etihad Stadium for several minutes before departing

Pubs, restaurants in England to reopen as virus toll eases