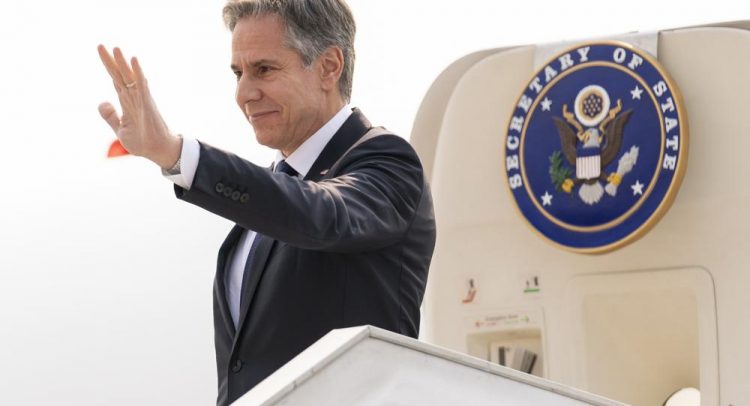 KINSHASA, Congo (AP) — U.S. Secretary of State Antony Blinken said Tuesday that his country will support the efforts led by Kenya and Angola to put an end to the violence in Congo’s east and to help solve the central African nation’s crisis with Rwanda.

Blinken traveled to Congo’s capital Kinshasa on Tuesday as part of his three-nation African tour. There, he met with Congo President Felix Tshisekedi and other government officials, including Congolese Foreign Minister Christophe Lutundula who joined him at a press conference after meetings.

“We want this violence in eastern Congo to end,” Blinken said. “We call on the M23 and all other armed groups to cease their actions, lay down their arms and come within the framework of the negotiation process.”

Blinken is in Congo for two days and was expected to encourage solutions to the violence in eastern Congo where attacks have increased dramatically in the past month, with the resurgence of the M23 rebel group and ongoing violence by the many militia groups vying for control of the mineral-rich region.

More than 40 people were killed over the weekend in the Ituri province by two other rebel groups.

“We are very concerned by credible reports that Rwanda has provided support to M23. We call on all parties in the region to stop any support or cooperation with M23 or, for that matter, any other non-state armed group.” He said during a joint news conference with Lutundula.

Congo has accused Rwanda of supporting the M23 rebels. Rwanda, is rejecting a report by United Nations experts saying they have “solid evidence” that members of Rwanda’s armed forces are conducting operations in eastern Congo in support of the M23 rebel group.

Rwanda accuses Congo of collaborating with another rebel group, the FDLR, and said regional security can’t be achieved until that issue is addressed. The FDLR was created by ethnic Hutus who fled Rwanda during the country’s 1994 genocide that killed at least 800,000 ethnic Tutsis and moderate Hutus. Congo has denied supporting the group.

The violence in eastern Congo has killed dozens and displaced tens of thousands, worsening the already existed humanitarian crisis in the country.

Blinken will travel later Wednesday to Rwanda to meet with President Paul Kagame and his foreign minister.

“The United States is doing everything it can to support the very important African-led mediation efforts, in particular the processes that are being led by Kenya and Angola, to bring peace, security and stability to the eastern Congo. We are not only following this very closely and carefully, we’re engaged in it,” he said.

Relations between Congo and its smaller neighbor Rwanda have been fraught for decades. Rwanda alleges that Congo gave refuge to Hutus who carried out the genocide. In the late 1990s, Rwanda twice sent its forces deep into Congo, joining forces with Congolese rebel leader Laurent Kabila to depose the country’s longtime dictator Mobutu Sese Seko.

A meeting between Rwandan President Paul Kagame and Congolese President Felix Tshisekedi in Angola on July produced a statement calling for a return to normal diplomatic relations, a cessation of hostilities, and the “immediate and unconditional withdrawal” of the M23 from its positions in eastern Congo.

“Let me simply add that all countries have to respect their neighbors territorial integrity. This is a proposition that we take very seriously around the world. We spent some time talking about that when it comes to Ukraine, it’s equally important here,” Blinken said.

Blinken announced that Congo has joined the Feed the Future program, which deals with the food crisis caused by climate change, COVID-19 and the war in Ukraine, and to work “in partnership with countries around the world to invest in sustainable, resilient food production for the long term.”

Another topic on the table was climate change and the conservation of what’s considered the second most important forest in the world.

Congo’s government was criticized last month when it opened an auction to explore 30 blocks of oil and gas located in the Peatlands in the Congo Basin forest, the world’s largest tropical peatland.

“The government of the Republic will ensure that there are no candidates, there are no companies that will come to us to exploit and kill the ecology,” Congo’s foreign minister Lutundula said.

He also announced that both countries will create “a working group on climate change that will be a framework for consultation and joint action. This also is a guarantee, it is a structure that will help us reconcile the need for the Congolese to enjoy its natural wealth and to protect the common heritage of humanity.”

US will stretch monkeypox vaccine supply with smaller doses