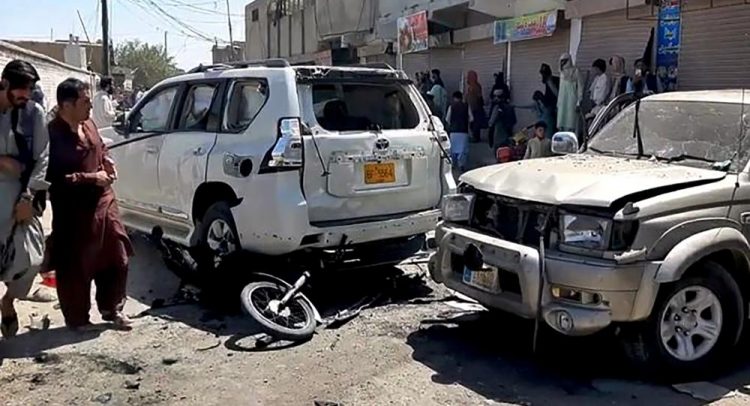 QUETTA, Pakistan (AP) — A powerful roadside bomb that went off on Friday near a vehicle carrying a local leader of an Islamist political party in southwestern Pakistan killed seven people, police and a government spokesman said.

It was unclear who was behind the attack in Chaman, a town in Baluchistan province.

Local police chief Abdul Bashir said the attack took place when Abdul Qadir, a local leader of a faction of the Jamiat Ulema-e-Islam party, was on his way to attend a pro-Palestinian rally. Along with the seven killed, at least 15 people were wounded, he said.

No one claimed responsibility for the attack and police said they were still investigating. Liaquat Shahwani, a Baluchistan government spokesman, condemned the bombing.

Hours later, responding to calls from the Jamaat-e-Islami party, thousands of Islamists and members of civil society groups rallied in the capital, Islamabad, in support of Palestinians. Similar anti-Israel rallies were also held in other main cities across Pakistan, which is among few countries with no diplomatic ties with Israel.

Quetta is the capital of Baluchistan, where security forces in Baluchistan have been battling an insurgency for more than a decade by separatists demanding autonomy or a higher share of the province’s gas and mineral resources. Pakistani Taliban and other militants also have a presence in the province.

Local residents examine damage of vehicles at the site of a bomb blast in Chaman, southwestern Pakistan, Friday, May 21, 2021. A powerful roadside bomb went off near a vehicle carrying a local leader of an Islamist political party in Pakistan’s southwestern border town of Chaman on Friday, killing multiple people and wounding several others, police and a government spokesman said. (AP Photo/Jan Achakzai)