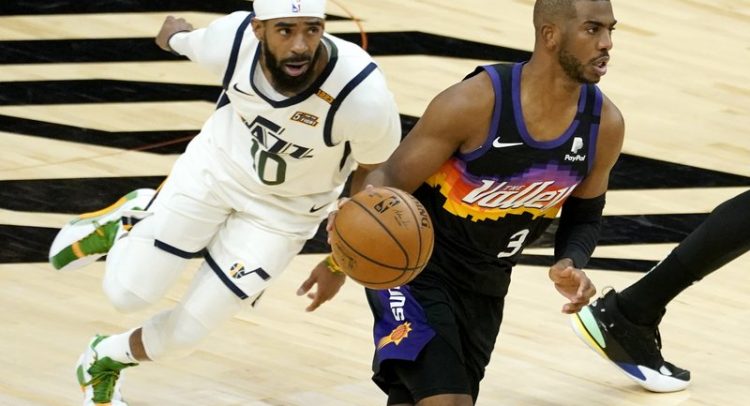 PHOENIX (AP) — Deandre Ayton kept bouncing up and down in the lane, tipping rebounds off missed shots to his Phoenix teammates on the perimeter. Devin Booker wasn’t having a great night shooting, but kept chucking the ball toward the rim anyway.

Then there’s Chris Paul, the Suns’ veteran point guard who is a constant whirlwind of discussion and dribbling that never stops.

On a night that the Suns were far from perfect, that energy carried them to yet another win. Booker scored 35 points, Paul added 29 and Phoenix beat the Utah Jazz 117-113 in overtime Wednesday night in an entertaining matchup between the top two teams in the NBA.

The Suns scored the first five points in overtime and never trailed again. Booker had a couple of clutch mid-range jumpers to keep the Jazz behind and Paul made a 3-pointer with a minute left that pushed Phoenix ahead 114-108.

Utah pulled to 114-112 on Mike Conley’s layup with 21 seconds left, but could never tie it. Paul hit two free throws with 7.8 seconds left to finally seal it and wrap up the season series with a game left. Phoenix has won seven in a row.

The Suns pushed ahead 100-96 in the fourth quarter on a 3-pointer by Jae Crowder with two minutes left. Donovan Mitchell made a contested 3-pointer with 10.4 seconds left for Utah to tie it at 102.

Booker’s 3 at the buzzer was off the mark. If the Suns were deflated, they didn’t show it.

“That’s just part of the game,” Suns forward Cameron Johnson said. “We’ve seen crazier things. We had to get ready in overtime and get back after them.”

Said Paul: “I think we did a good job of weathering the storm.”

“We know what we can be,” Mitchell said. “We know we have work to do as well.”

The Jazz bounced back from an 11-point halftime deficit to take a 78-77 lead going into the fourth quarter after Mike Conley rattled home a jumper at the buzzer. It was a bruising game and the Suns had a 61-45 rebounding advantage that helped them win despite a mediocre shooting night.

“With games like this, we really get a chance to show our depth,” Paul said.

Utah scored just one basket in the first five minutes, giving Phoenix time to build a 13-2 lead. The Jazz recovered quickly, jumping ahead 21-20 at the end of the first quarter.

But the Suns had another push in the second, building a 51-40 halftime advantage.

It was a matchup between two unexpected Western Conference heavyweights that have played even better than expected so far this season. The Jazz lead NBA at 38-13, 1 1/2 games ahead of the Suns (36-14).

Both teams have taken advantage of relatively good health while rivals — like the L.A. Lakers and LeBron James — have dealt with injuries to key players.

The Suns are trying to stop a playoff drought that’s lasted more than a decade. Phoenix has beaten Utah twice this season, which clinches the three-game season series in case of a tie in the standings.

The Suns raised the crowd capacity to 5,500 fans for the first time this season. That’s about 30% of the 18,000-plus seats at newly-renovated Phoenix Suns Arena.

Jazz: Utah had won nine straight games before having its streak snapped on Monday in a loss to Dallas.

Suns: F Abdel Nader (right knee soreness) was unavailable and has missed the past eight games. Recently-acquired Torrey Craig has taken most of the playing time with Nader unavailable.