Two bombs exploded in the packed streets near the finish line of the Boston Marathon about 7am NZT. It is the first terror attack on US soil since the September 11 attacks in 2001.

The blasts killed three people and injured more than 141 in a terrifying scene of shattered glass, bloodstained pavement and severed limbs at the world’s oldest and most prestigious marathon. A child, 8, was among the dead and many victims were critically injured. CNN reported eight children were among those hurt, one as young as two, who was being treated for a head injury.

The Wall Street Journal said counterterrorism experts had found what they believed were five additional unexploded devices around Boston, citing two people briefed on the investigation.

Boston Police Commissioner Ed Davis said no suspects were in custody but they were talking to a number of people as their manhunt widened.

Images emerged later of police handcuffing and arresting a man at Boston Common – about 1.6km from the marathon’s finish line.

Republican Michael McCaul, chairman of the Homeland Security committee, told CNN that a “person of interest” was being questioned but the FBI declined to confirm whether or not this was the case, saying just that the investigation was “very fluid”.

He had been briefed by the White House but said it was not clear what, if any, role the person held had in the attack.

A senior US intelligence official said two other bombs were found near the end of the 42km course. At the time of the blasts, about 17,000 of the 23,000 competitors had finished the marathon. 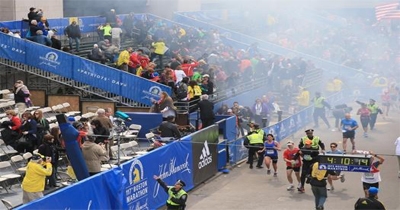 US Federal Authorities said the bombings were a “terror attack”, but there has been no comment on whether it was a domestic or international in origin.

At the White House, President Barack Obama vowed that those responsible would “feel the full weight of justice”.

Obama, speaking three hours after the bombs exploded, said increased security was needed across the country.

”We don’t yet have all the answers… we will get to the bottom of this. We find out who did this and why they did this.

He said the FBI and CIA were involved, and Boston officials were being given everything they needed.

The White House did not yet know who planned and carried out the attack but it was being handled as “an act of terror,” an official said.

“Any event with multiple explosive devices – as this appears to be – is clearly an act of terror.”

Authorities in Washington said there was no immediate claim of responsibility.

“They just started bringing people in with no limbs,” said runner Tim Davey, of Richmond, Virginia.

He and his wife, Lisa, tried to keep their children’s eyes shielded from the gruesome scene inside a medical tent that had been set up to care for fatigued runners, but “they saw a lot”.

“They just kept filling up with more and more casualties,” Lisa Davey said. “Mostly everybody was conscious. They were very dazed.”

The fiery twin blasts took place almost simultaneously and about 100 metres apart, knocking spectators and at least one runner off their feet, shattering windows and sending dense plumes of smoke rising over the street and through the fluttering national flags lining the course.

As sirens blared, emergency workers and National Guardsmen assigned to the race for crowd control began climbing over and tearing down temporary fences to get to the blast site.

A pool of blood formed and huge shards were missing from window panes as high as three stories.

Kiwi and former Alliance Party MP, Laila Harre, told RadioLive she had just crossed the finish line when the explosions happened. She was little more than a couple of hundred metres away and evacuated immediately.

Wellington runner Andrew Wharton was icing his legs after the run when he and his wife heard the two explosions, he said.

”We heard two loud bangs about three or four seconds apart. I looked out the window and saw people running and realised something had happened.

”We went up to the roof of our hotel and I could see the aftermath below … there was a lot of blood, a lot of people lying everywhere, others were crying and didn’t know what to do. It was chaos. 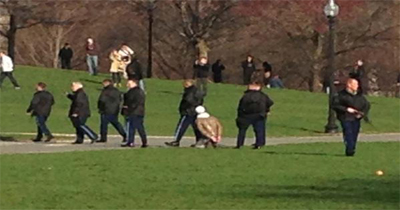 Police chief Davis asked people to stay indoors or go back to their hotel rooms and avoid crowds as bomb squads methodically checked parcels and bags left along the race route. He said investigators didn’t know precisely where the bombs were planted or whether they were hidden in mailboxes or trash cans.

He said authorities had received “no specific intelligence that anything was going to happen” at the race.

The Federal Aviation Administration barred low-flying aircraft from within 6km of the site.

A few kilometres away from the finish line and around the same time, a fire broke out at the John F Kennedy presidential library. Davis said it may have been caused by an incendiary device but didn’t appear to be related to the bombings.

The first loud explosion occurred on the north side of Boylston Street, just before the photo bridge that marks the finish line. The second explosion could be heard a few seconds later.

They occurred about four hours into the race – a typically a highly crowded time near the finish line – both because of the slow-but-steady recreational runners and because of all the relatives and friends clustered around to cheer them on.

Runners in the medical tent for treatment of dehydration or other race-related ills were pushed out to make room for victims of the bombing.

Authorities went on to the course to carry away the injured while stragglers in the 26.2-mile race were rerouted away from the smoking site.

Roupen Bastajian, a 35-year-old state trooper from Rhode Island, had just finished the race when they put the heat blanket wrap on him and he heard the first blast.

“I started running toward the blast, and there were people all over the floor,” he said.

“We started grabbing tourniquets and started tying legs. A lot of people amputated. At least 25 to 30 people have at least one leg missing, or an ankle missing, or two legs missing.”

At Massachusetts General Hospital Alisdair Conn, chief of emergency services, said: “This is something I’ve never seen in my 25 years here … this amount of carnage in the civilian population. This is what we expect from war.”

In Britain, police said they were reviewing security plans for Sunday’s London Marathon, the next major international marathon.

In New York City, police spokesman Paul Browne said that critical response teams are deployed around the city. Officials were stepping up security at hotels and other prominent locations.

The Boston Marathon is held on Patriot’s Day, a Massachusetts state holiday which commemorates the first battles of the American Revolution in 1775.

Rihanna Not the New Face of Chanel