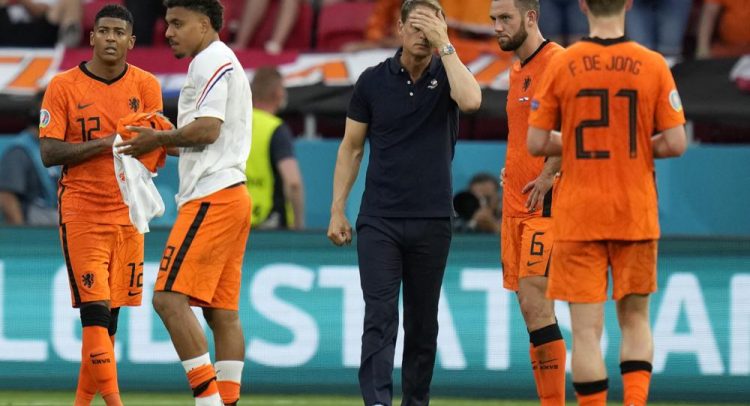 Bounced out of Euro 2020, the Netherlands looks to future

THE HAGUE, Netherlands (AP) — After a seven-year wait for a spot in a major tournament, the Netherlands got three workmanlike wins against outmatched opponents and a humbling loss to the Czech Republic.

What looked like a Super Sunday for Dutch sports fans following Max Verstappen’s win at the Styrian Grand Prix and Mathieu van der Poel’s Tour de France stage win, turned sour when the Netherlands lost 2-0 in Budapest and tumbled out of the European Championship.

The next tournament, the 2022 World Cup, feels a long way off for a team struggling with its very identity.

Apart from conceding two goals in five minutes of defensive chaos against Ukraine in the team’s opening 3-2 victory at Euro 2020, the Dutch looked largely untroubled against outclassed opponents as they also beat Austria 2-0 and North Macedonia 3-0.

But criticism of coach Frank de Boer’s decision to play a formation of three defenders, five midfielders and two forwards that had been largely silenced by the victories returned after the loss in Budapest.

The match report Monday in national daily De Volkskrant accused De Boer of “squandering the identity of a unique soccer nation” with his team’s style of play.

Many insist on the attacking 4-3-3 lineup — a formation that is drilled into players from the junior level — and the type of free-flowing attacking soccer it generates, but De Boer said he did not have the players to make it work.

“We made the choice because we think that our best players play best (in the 3-5-2 system),” De Boer said.

Questions about De Boer’s future as coach were asked immediately after the game.

He said it was too early to speculate, but did not hide his disappointment or his role in the defeat.

“I’m responsible at the end of the day, so you can always blame it on me,” De Boer said. “I need to look in the mirror.”

One of the main beneficiaries of the controversial formation was wing back Denzel Dumfries, whose surging runs down the flank and first two international goals made him the star of the team’s first two matches.

The Netherlands went into its first major tournament since reaching the semifinals at the 2014 World Cup in Brazil without its hugely influential captain, Virgil van Dijk, who is still working to return after a season-ending knee injury in October.

His calming leadership was badly missed on Sunday as the Netherlands lost their way after central defender Matthijs de Ligt was sent off after a handball.

Van Dijk’s replacement as captain, midfielder Georginio Wijnaldum, also failed to lead by example as the Czechs stifled the Dutch, not allowing them a single shot on target.

“Not good enough,” said Wijnaldum, who moved from Liverpool to Paris Saint-German on the eve of the tournament. “You have to be honest about that.”

De Boer said he recognizes the feeling of deflation from his time as a defender in the Dutch team that lost in the Euro 2000 semifinals to Italy after a penalty shootout. De Boer missed a penalty during the match and another in the shootout.

“In 2000, I experienced the feeling that we should have gone further and that hurts terribly,” De Boer said.

The question now is whether De Boer will be around to continue the World Cup qualification campaign. The Netherlands is second in its qualifying group behind Turkey, a team that had an even more disappointing Euro 2020 than the Dutch.

Asked about his future in an interview with Dutch national broadcaster NOS, De Boer said it was too soon to decide.

“I don’t have to answer that now,” De Boer said. “We are going to calmly think about it. At the moment I have an unbelievable hangover, along with all the players and fans.”