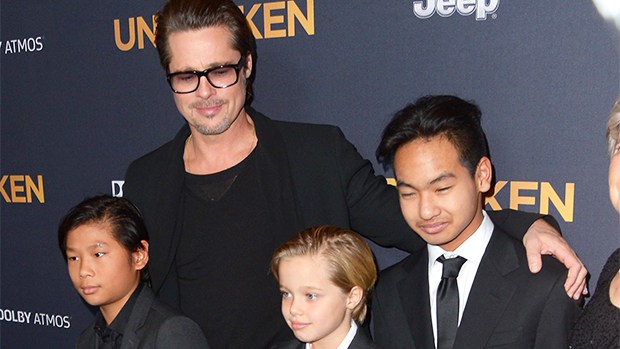 As Angelina Jolie and Brad Pitt’s custody battle turns bitter, their kids are caught in the middle. Though Angie paints her ex as a deadbeat, we’ve got EXCLUSIVE details about the kind of dad he is!

You got to feel bad for Brad Pitt, 54, and Angelina Jolie’s kids. The custody battle between Brad and Angie, 43, has turned ugly, with her accusing the Fight Club star of holding back on child support. In spite of these claims, sources tell TMZ that Brad has worked hard to maintain a relationship with his family. He’s been spending the bulk of his summer in England, where Angelina and the six kids have been living. It seems Brad’s hard work has paid off, because last month, his visitation increased to 4 consecutive days at a time, according to TMZ.

The increased access hasn’t really helped Brad and Angie’s fractured relationship. The two “never interact with each other” and the handoffs are always through their assistants or nannies. Bummer. While things have gotten cold between these two ex-lovers, Brad remains warm and sweet towards his kids. “Brad is the consistent one,” a source EXCLUSIVELY tells HollywoodLife.com, “and has always been a very loving father despite Angelina trying to make him out to be a bad parent because of their child custody issues.”

It should come as no surprise – especially after the allegations that Brad hasn’t paid any “significant” child support since they broke up in 2016 – that Angie doesn’t want to ever see her ex-husband again. If she had her way, an insider EXCLUSIVELY told HollywoodLife.com, she would make sure their kids — Maddox, 17, Pax, 14, Zahara, 13, Shiloh, 12, Knox, 10, and Vivienne, 10 – would have “nothing to do” with him, either. Unfortunately for Angie, thanks to a court order, the kids will have a relationship with their father.

Angelina, through her lawyers, accused Brad of not paying any “meaningful” child support, causing Brad to clap back by saying he paid $1.3 million in child support and lent her the $8 million to buy her current home. This caused Angie’s lawyers to respond to that, saying that a loan is not exactly child support. “He has not fully met his legal obligations to support the children,” lawyer Samantha Bley DeJean said. The attorney said Angie is asking Brad to pay 50% of the children’s expenses, and that Jolie has “had to shoulder the majority of those without his contribution for the past two years.”

Technology-driven approach to crime fighting in St. Kitts and Nevis