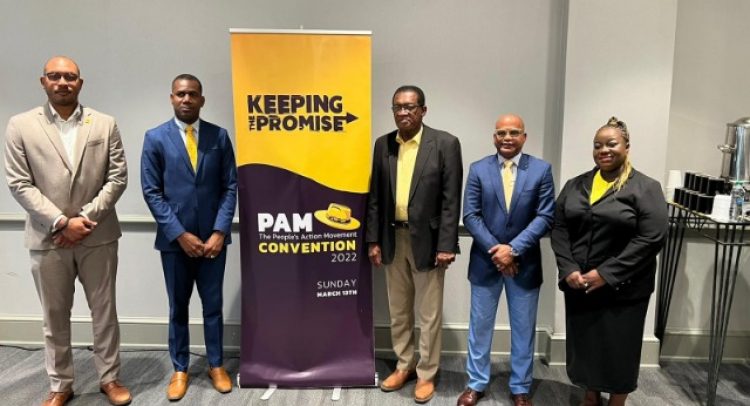 Brantley to be Guest Speaker for PAM’s Convention

Basseterre, 23rd February, 2022, (MyVueNews.com)-The political climate seems to be getting more humid in St. Kitts & Nevis, with the annual convention on the horizon for the Co-ruling People’s Action Movement, (PAM), which on Tuesday, 22nd February, announced that they have set Sunday 13th March, as their date for the meeting of delegates and leaders.

Already, the buzz has started, perhaps driven by the memories of the 2021 edition of the convention, which many described as a positive turning point for the Party, which some critics said had been struggling to keep its base together and excited.

However, by the time the meeting was over, PAMites had been re-energized and motivated and left on a high, not experienced in recent years.

Next month’s PAM convention is coming just five months after the main opposition St. Kitts-Nevis Labour Party held their much-anticipated delegates convention, which had a prelude of political drama that had divided the membership.

Not to be outdone, the People’s Labour Party, quickly issued a notice, announcing that their convention will take place from 19th to 27th March…with pre-events leading up to the actual conference day. PLP makes up the third group in the three-party Team Unity Government, with PAM and CCM.

While speaking at a press conference at the St. Kitts Marriott Resort, on Tuesday, Political Leader of PAM, Shawn Richards, informed the media and thousands listening and viewing via social media and radio, that his Party has tipped Nevis’s Premier and Leader of the Concerned Citizens Movement, (CCM), Mark Brantley, to appear as the Guest Speaker for the convention.

Brantley also serves along with Richards, in the Federal Government, as Minister of Foreign Affairs. But on the local front in Nevis, Brantley’s CCM, forms the Island Administration, and they appear to be at the dawn of preparations for the local elections, later this year.

When the convention was staged in 2021, Simmonds was said to have ignited the political spirits of the core members of the Party and seemed to have breathed new life into the organization, with his powerful and entertaining presentation that drew many standing ovations and applause.

Last year’s convention was held, for the first time, outside of the capital Basseterre, with delegates journeying to the western town of Sandy Point-which is the constituency represented in parliament by Richards. This year, 2022, the organization is again spreading its wings outside of the city and is heading to Cayon, which, for decades, has been a stronghold for the People’s Action Movement and in the last three elections had voted to elect PAM’s Deputy Leader, Eugene Hamilton.

The press conference also heard presentations from the two Deputy Political Leaders-Eugene Hamilton and Lindsay Grant, and also General Secretary of the Party, Natasha “Shanny” Grey-Brookes, who was announced as the Party’s new candidate for East Basseterre.

The 2022 Convention will be held under the theme-“Keeping the Promise”.

Carnival Prize-giving set for this weekend